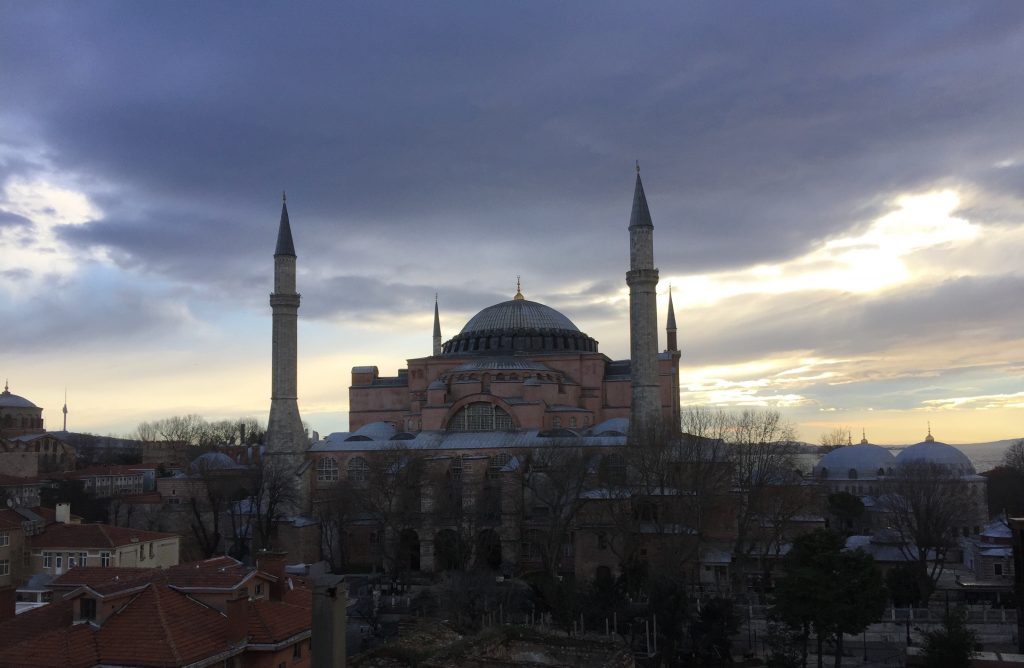 The Winter of Our Culture

The recent transformation of Hagia Sophia in Istanbul into a mosque is not a religious act. It is a political act of a sovereign government that is at least nominally secular and a valued NATO ally. It is not an expression of religious freedom because there has been a freely operating mosque in Hagia Sophia since 1985.

Over the past ten years other Byzantine churches dedicated to Hagia Sophia in Vize, Trebizond and Iznik have already been transformed from museums into mosques. The Studion Monastery, and now the Church of Chora, both part of Hagia Sophia Museum, have also been so transformed, inevitably with significant alteration to the physical structures of these UNESCO World Heritage sites.

Hagia Sophia and the Art of Cultural Cleansing

At this time when Black Lives Matter is rightly foregrounding questions around colonialism and historical memory, Hagia Sophia must also matter! Its conversion glorifies Ottoman imperialism, its forced conversions of religious sites and its religious superiority, perhaps long forgotten by Turkey’s NATO allies, but still haunting the troubled political identities of its post-Ottoman neighbours and Turkey’s own shrinking religious minorities. Similar to its denial of the Armenian genocide, Turkey has once again demonstrated its refusal to accept its share of historical guilt for yet another aspect of the legacy of the Ottoman Empire. This trend changes the trajectory of contemporary moderate dialogical Islam and its efforts to develop a counter-narrative to Radical Islam. This is an act of cultural cleansing against all – Muslim, Christians and non-believers – because it offers an irresponsible restoration of the past which fuels religious and ethnic divisions and symbolically shrinks civic spaces, weaponizes religious cultural heritage in the context of a political conflict, erodes cultural heritage sites’ multiple identities and seeks to export Turkey’s state practices to other conflict zones.

For the vast majority of former Ottoman subjects, the Fall of Constantinople in 1453 was not simply the end of Byzantium and the birth of the Ottoman Empire. Setting aside the major economic advantages and the freedom of movement within a new major world Empire, It was a political, cultural and religious blackout which deprived thriving medieval states which were entering into the equivalent of a European Renaissance in the fourteenth century from their natural civilizational development, a process from which they began to recover as late as the eighteenth century. Many would argue that this process of recovery remains incomplete and is directly linked with political traumas of the twentieth century involving ethnic cleansing, regional wars and the cyclic resurgence of right-wing nationalism, and could be traced through the Balkan Wars, the partition of Cyprus and the wars in Former Yugoslavia. In the historic narratives, this is a period described as a ’yoke’, a ‘slavery’. If I was a sixteenth century Ottoman subject I would have had to live with the possibility that my young son could be recruited as a child to the elite Ottoman Janissaries corps, which were exclusively made up by boys from Christian families and converted to the Islamic faith. What is worse is that I would have probably gladly given my consent, desperate to offer my son in order to improve my desperate, pathetic impoverished social existence. Such aspects of deep resentment that our ancestors had to make such choices has haunted us through generations and has probably taken us as far as my generation to move on to the point where we no longer cross swords but glasses with our beloved Turkish friends and share ideas rather than painful memories and mistrust, and look forward to doing things together, often in the embrace of the City which means so many different things to all of us, and as an ancient matchmaker brings us closer together, unreal pairs in an unreal world.

The process of building religious, political, economic and cultural bridges has been slow and not always successful. In these settings, Hagia Sophia and other Byzantine cultural sites in Istanbul have become not a home but a meeting, remarkable agents for change and settings for different cultures to meet and discover how much they have in common rather than what divides them. Ataturk’s vision that as a museum Hagia Sophia could become a symbol of a modern secular Turkey of equal citizens was in a way a failed success. It revealed the magnificent mosaics of Hagia Sophia and the Church of Chora, but did not change dramatically the fortunes of Turkey’s shrinking religious minorities which continued gradually to disappear and changed the cosmopolitan makeup of Istanbul. Not anymore! The cultural heritage approach of the Erdogan government has moved in the opposite direction. At a time of weakened international systems, an increasing number of governments hide more than ever behind their strong sense of sovereignty and consolidate their weakening political credibility with what could only be described as a ‘religious exceptionalism’. This is a process of creating socially divisive and illiberal policies legitimised by bogus faith-based arguments.

President Erdogan’s move, praised by Hamas and condemned by Egypt, has already been spelled out as a first step towards the liberation of Al Aqsa and the Dome of the Rock in Jerusalem. The transformation of Hagia Sophia has thus become a new frontier in the weaponizing of cultural heritage, and religious cultural heritage in particular, in an increasingly complex asymmetric warfare in the MENA region and beyond. And while there has been an acknowledgment that religious cultural heritage is becoming strategically important in war conflicts as well as in time of peace there have not been any consolidated international responses to these emerging challenges. The UNESCO initiative for cultural heritage of religious significance broke the ice in 2005 but did not evolve from its initial blueprint into concrete policies. Most recently in the Al Mahdi case, ICC has linked the destruction of religious cultural heritage with genocide and crimes against humanity, indicating an emergent but unconsolidated international response. All this places Hagia Sophia at the epicentre of a complex process in which religion emerges as a factor in shaping domestic and foreign policy and demonstrates the new role cultural heritage is likely to play in the consolidation of this process.

Such wider implications of the transformation of Hagia Sophia require a stronger and coordinated international response. Cultural heritage is no longer simply a UNESCO priority, and ignoring its weaponizing in regional conflicts will undermine the wider UN, EU and NATO regional strategies in the MENA region and beyond. This is not going to be easy, and it certainly does not help that UNESCO has been weakened by the exodus of the US and Israel and by its own internal financial and operational problems, but Hagia Sophia could be the much needed wake-up call to recognize that cultural heritage is increasingly linked to human rights, and that human dignity does actually matter for all aspects of international cooperation, international law, international investment, sustainable development and defence and security.

Peter Petkoff is a Senior Law Lecturer at the Brunel Law School and the Director of Religion, Law and International Relations at Regent’s Park College, Oxford. In addition, he serves as Managing Editor for the Oxford Journal of Law and Religion. His book on ‘Sacred Places and International Law’ is due to be published in 2020.