On Thursday, July 1st, the G20 Interfaith Forum held its first webinar organized by its Working Group on Gender Equality in preparation for the annual G20 Interfaith Forum meetings in Bologna, Italy this September. The event was co-sponsored by the International Academy for Multicultural Cooperation (IAMC); the European Centre for Religious Studies (Eucres); A Common Word Among the Youth (ACWAY); and the Freedom Business Alliance. Panelists included Sadhvi Bhagawati Saraswati, Secretary-General of the Global Interfaith WASH Alliance and President of the Divine Shakti Foundation; Dr. Olivia Wilkinson, Director of Research for the Joint Learning Initiative on Faith and Local Communities (JLI); and Sofia Caseiro, Co-Chair of the IF20 Gender Equality Working Group, who moderated the discussion.

Sofia Caseiro began the webinar by welcoming all participants and attendees and emphasizing the importance of the discussion topic. While SDG 5 seeks “the achievement of gender equality and empowerment of women and girls,” after more than a year living in the pandemic, the vulnerability of women has only increased.

“Women have been impacted across every sphere of society. At the end of this webinar, I hope we will come away with new ideas and useful insights to be used in developing our policy suggestions for the G20 leaders.” 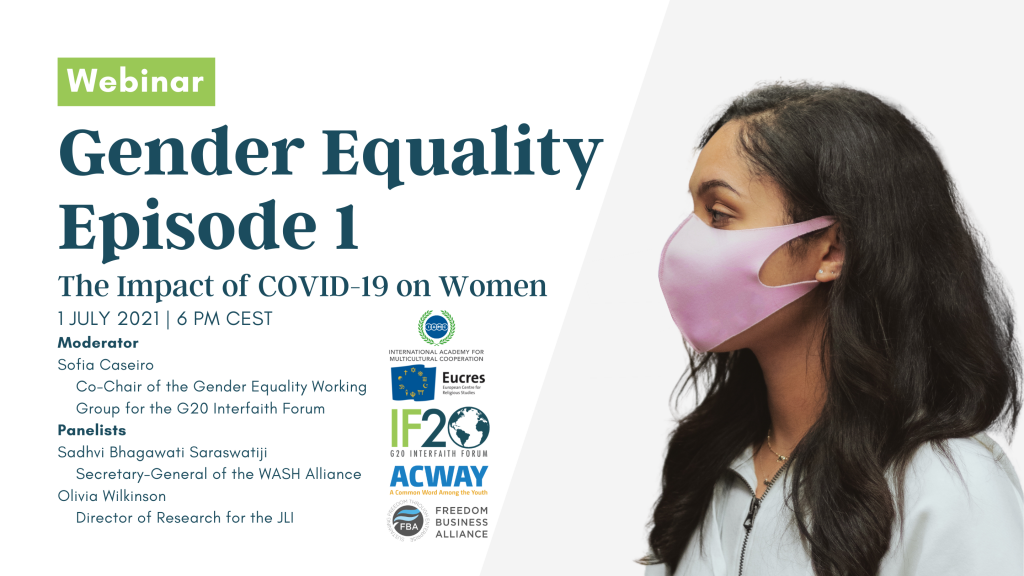 The panel was organized as a Q&A, with speakers building the conversation around a series of questions asked by Caseiro.

In your work, what have you observed regarding the impact of COVID-19 on women?

Saraswati began her comments by emphasizing the essentiality of the conversation.

“When we commit to leaving no one behind, we can only do that when we’re aware of who is being left behind and how.”

Saraswati’s work mainly takes place in rural and semi-urban areas in the northern region of India. She said COVID-19 hit India particularly hard, and women’s access to everything was severely diminished—with their ability to earn a living being decimated. More than 15 million women in India lost their jobs during the first month of the lockdown, which added up to more than 40% of the female workforce. Between Oct 2019 and Oct 2020, the overall workforce shrank by 10% for women vs 2% for men.

In a related way, Saraswati pointed to how domestic violence rates skyrocketed in response to feelings of great helplessness, powerlessness, and frustration in the men, who were depending on hand-to-mouth wages when the economy plummeted—leading to exacerbation of an already large problem with alcoholism. Women have also had much less access to the technology that has been a great boon in overcoming the challenges of COVID, with many unable to even access the internet to understand their options for help and opportunities.

Wilkinson referenced her more research-based work with the Religious Responses to COVID-19 initiative, which is collecting a vast repository of information around the responses of faith actors to COVID-19. Within that information and other reporting surrounding COVID-19, she said the issue of gender and gender-based violence has been prominent. Recurring main themes include women leading the health response, women carrying the majority of the load in the hidden work at home, women struggling as informal jobs disappear in economies influenced by lockdowns, and the increase of violence against women and children.

She also commented on the increasing media coverage of gender-based violence surrounding the pandemic:

“What we’ve seen in terms of research—in some ways, the reporting has been misinformed. It’s presented as the dramatic ‘Shadow Pandemic’ of violence against women, as though it’s something new—but that really demonstrates how much we’ve side-lined and ignored the cases of violence of women and children in the past. It’s really misrepresenting a lot of previous knowledge and work that just hasn’t been at the forefront.” 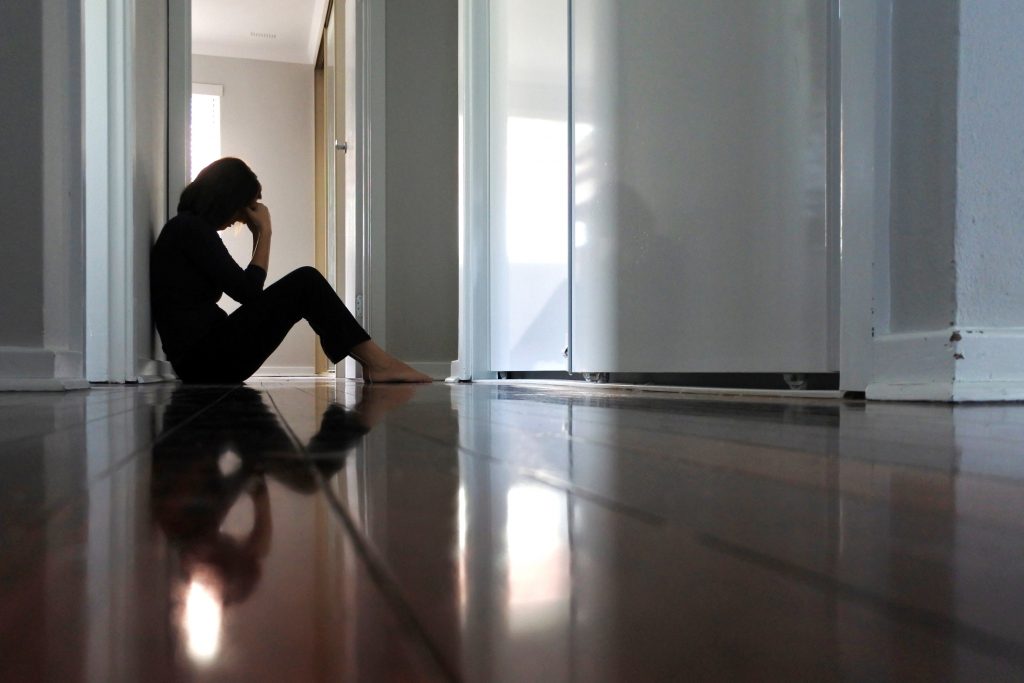 What role should religious communities play in changing societal attitudes and preventing these abusive behaviors?

“The power of religion and faith is that it brings us into contact with God, and helps us to know the truth of who we are. But that power goes beyond the individual level. It helps us change how people think and how people behave. It’s to religion that people turn for values, ethics, and norms.”

Saraswati spoke about the need for religious communities to emphasize that violence is wrong—drawing on all-too-common examples she’d seen in India where physical abuse of women and children was justified under the pervasive perspective of ‘teaching a lesson,’ with former victims of abuse (now abusers) thinking ‘well I was hit, and I turned out okay.’ In the joint families of India, it’s very likely that a man’s mother is in the home when he’s beating his wife. And probably because these older women experienced the same violence themselves, they perpetuate its continuation directly or simply allow it to happen—even when they’re now in a position where they could do something about it. According to Saraswati, protecting the younger generation might start with thinking about how to heal the older generations.

She referenced the abundance of scriptural reference in all religious traditions to the divine feminine, and explained how her organization harnessed the power of religious holidays centered on female goddesses to reinforce that “the mother goddess exists in the form of your wife, your daughter, your sister, and your mother. In the same way you would never walk into a temple and beat the image of the goddess, you should not do that to the woman in your home.”

She also talked about how gender inequality and violence against women is rooted in a sense of separation, often stemming from a traditional belief that women, due to menstruation and giving birth, are somehow dirty and impure.

“As long as menstruation is considered impure, it creates a foundation upon which women are somehow deserving of being pushed away, kept away, isolated, and denied access to their basic rights. And from there, it’s not a big leap to think that it’s ‘okay’ to teach them a lesson physically. As long as we allow ourselves to think of anyone as separate or different, violence and discrimination only escalates.”

Wilkinson dived deeper into the concept of “norms,” looking at different types of norms and how they work together to influence human and societal behavior. Those norms included:

“These motivations are all interlinked as a complex web, but the problem with faith engagement to fix these problems right now is that there isn’t that intricate understanding of how these norms are affecting people. The rush to faith engagement in the COVID pandemic has been largely oversimplified. There’s worth in the work that’s been done, but we need to repeat the point that this is an incredibly complex situation, and we need to take the time to understand what’s going on.”

How, post-pandemic, can we provide better opportunities for women’s leadership in religious communities?

“In India, we see very successful women’s leadership in almost every sector but religion. In politics, in government, in business, even in traditionally male areas like the police force. But in religion it’s not there. There, we need the allies of the men. And it’s going to take men already within the religious communities to break that and create that initial space. Male allies exist in every religious tradition, and we need to reach out to them and harness that power.”

“We are all involved in the subject of women’s leadership because it’s personally important to us. I grew up in a religious community that rejected women’s leadership, and ever since then I’ve been invested in this issue on a personal level. Now any report, any guidance note or recommendation that I look at, I only take it seriously if I can apply it to myself and my personal religious community.”

In conclusion, Caseiro thanked the panelists for their input and insights and encouraged everyone to continue to follow the work of the Gender Equality Working Group in coming weeks.

“Gender equality is beneficial to our communities and essential to the reconstruction of the post-pandemic world. Women are agents of transformation  And hopefully the things that were said today will inspire some to step up and enact change.”