Over the past 25 years, the world has seen changes that most people could never have imagined. Interactions crossing the world are now commonplace, and not just because of the growth of the internet. There are holidays in exotic locations, globetrotting career breaks, cruises crossing oceans, working in foreign stock markets, student ‘gap years,’ and educational exchange programmes.  All offer international opportunities to explore and learn, and until the outbreak of COVID, many people saw these as a rite of passage.

Possibly the greatest change that modern globalisation brings is the proliferation of trade and business activity that navigate seamlessly across continents, often driven by a rapidly changing markets including seasonal traditions, planned or unforeseen events, fluctuations in weather and climate, or responding to trends orchestrated by commercial marketing or social media.  Shamefully, a commodity hidden in evolving global markets is the exchange of human beings to be sold or passed on as goods in a disposable culture. People are used and discarded on a whim to meet market demands.

The Profits of Human Trafficking

An important question to consider is this: ‘As business has evolved and benefitted from a willing workforce and cheap resources, who has benefitted and who is losing out?’

With over 40 million people suffering—lost in forced labour, sexual exploitation, domestic servitude, forced criminality and organ harvesting—their pain and abuse should shame us all. As the current incumbents of this planet, we are all in some way responsible, but who is profiting? Who is enabling these crimes to flourish?

Our personal connection to this crime might be much closer than we think. The products for sale in our high streets, the vehicles we drive, the technology we use—all of it is often a result of a child working down a mine for cobalt, or in a plantation harvesting rubber for tyres, or a woman forced to sew garments in a Bangladeshi factory for fashion outlets in New York, Paris or London. 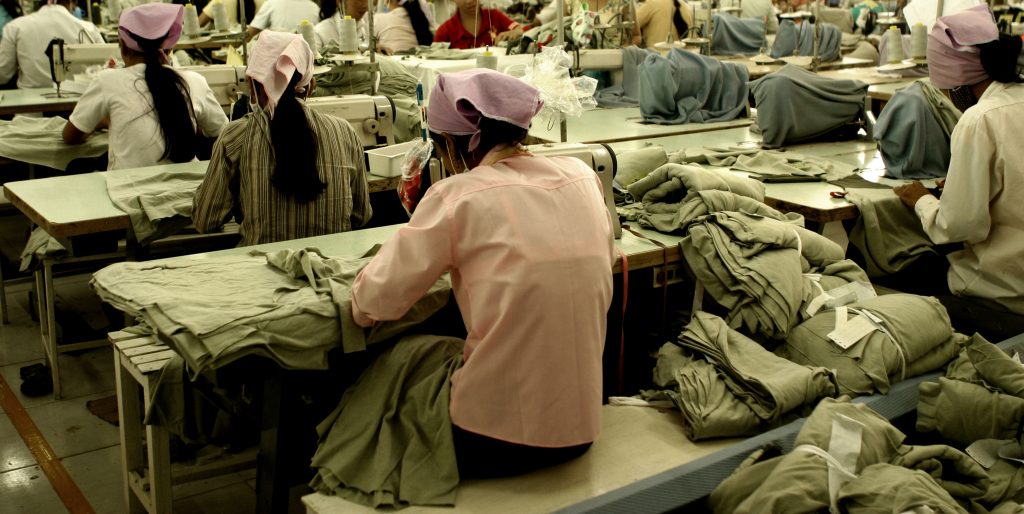 Success has increasingly been seen through the lens of financial prowess and the accumulation of wealth. Nations ranking in GDP, prioritisation of shareholder dividends, exorbitant bonuses for executives, and the adage ‘stack ‘em high sell ‘em cheap’ have all contributed to a blind spot where workers are exploited.

Change is overdue, and requires a new model—focusing on prevention at the core of domestic and international legislation and responses. The introduction of business regulations and financial policies to make this a crime not worth considering (as the stakes are too high) is needed in order to make those who profit work hard to prevent their countries and businesses from profiting from ‘tainted money’—what Pope Francis has termed ‘blood money.’

A Need for Leadership

A global fellowship of action and transparency is needed to drive this change. Recalling the very poignant words of the second Secretary-General of the United Nations, Dag Hammarskjöld:

“The United Nations was set up not to get us to heaven, but only to save us from hell.”

Many now live that hell on earth, and it is our duty as people of good will—people in leadership—to reset the moral compass and be the catalyst that demands an end to the suffering and profiteering. There has to be a recognition and understanding of the links to poverty, lack of education, work and good health care, with the desperation many people find themselves in to provide the most basic needs for their families.  Since the start of the pandemic, many jobs and sources of income have disappeared throughout the world, hunger and famine have increased, and the security of a place to sleep and live has been taken away, with the result being millions of men, women and children forced into situations of serious vulnerability, now at greater risk of exploitation.

The fight against this global crime must move forward with a knowledge of the risks. Firstly, we need to acknowledge the issues, the limitations, and even the failings of the current models being used to fight human trafficking.

These criminals work with stealth, taking advantage of ample and immediate access to their commodity, while measures to counter them are slow, have huge gaps, and lack substance.  Those who should be mandated to prevent these crimes, such as governments, multi-lateral businesses, landlords, statutory agencies, and financial institutes currently have no obligation to act on the commitments they make, with most doing no more than posturing or making gestures.

When a new vehicle rolls off the production line, the checks and balances to meet safety standards are immense. When it is driven, governance and legislation cover all aspects of safety, from the condition of the vehicle and the road to driver standards. If the manufacturer becomes aware of a defect, even years later, vehicles are recalled. We understand and expect this because it directly relates to us—so where is the same governance and accountability to halt human trafficking?

“It constitutes an unjustifiable violation of the freedom and dignity of the victims, constitutive dimensions of the human being wanted and created by God. This is why it is considered a crime against humanity.”

With these strong words, why is there still reluctance to demand prevention?  Is it vested interests, the size of the challenge, a lack of ambition, complacency? Or is it that we are not willing to make changes, as we have become used to our globalised luxuries and fear that a change may cost us more financially?

Breaking Out of Current Systems

William Wilberforce was a deeply religious man who campaigned continuously on the importance of religion, morality and education. However, his now world-renowned fight to end slavery was not welcomed by all, as it was seen as detrimental to Britain and its Empire. One such denouncer was Lord Admiral Horatio Nelson, who wrote:

“I have ever been and shall die a firm friend to our present colonial system.”

He went on to explain:

“I was bred, as you know, in the good old school, and taught to appreciate the value of our West India possessions; and neither in the field or in the senate [House of Lords] shall their interest be infringed whilst I have an arm to fight in their defence, or a tongue to launch my voice against the damnable and cursed doctrine of Wilberforce and his hypocritical allies.”

Wilberforce often felt overwhelmed by his adversaries, but refused to give in. One of his most famous quotes reflects his values:

“Let everyone regulate his conduct… by the golden rule of doing to others as in similar circumstances we would have them do to us, and the path of duty will be clear before him.”

The plan of action needs rethinking—to one where this crime does not pay. Where, if you are seen to profit from this crime, you will lose those profits and the money will instead be made available to assist with reparation and in the fight against human trafficking.

Some, even in the anti-trafficking arena, will doubt this can be achieved, but it is often the absence of the right expertise and allocation of resources that prevents progress.  We should look towards a hybrid of the criminal justice efforts on terrorism, the activism on climate change, and the humanitarian response to COVID-19, for within these three models may be the answer.

Once we accept that the current model for fighting human trafficking is not working and reflect on what we want to achieve, then, perhaps, we might become serious in our aims.

As a start, we should consider what our service should be.  Whilst recognition and celebration of achievement has secured  a sought-after place in our modern world, humble service, humanity, and restoring dignity for the exploited should be the prize we seek. The awards should be the freedom of the vulnerable from exploitation. To do this, there needs to be a focus is on who is causing these crimes, who benefits, and who should be held accountable.

We need to value and listen to the local people who are working on the ground, and who are tirelessly working to provide education, health care, and safe employment within their own communities and cultures.

As the G20 Interfaith Forum, our first duty is to God, who asks us to treat our fellow humans as equals.  In truth, we are possibly further from that than ever.  We need to change ourselves and how we behave, so in our hearts we can provide the moral leadership to bring this devaluation of God’s image to an end once and for all.

Following 30 years in policing, including leading the Metropolitan Police Human Trafficking Unit, Kevin Hyland was appointed as the UK’s first Independent Anti-Slavery Commissioner in 2014.  He was awarded an OBE in the Queens 2015 New Year’s Honours and served as Commissioner with distinction until 2018. In 2018, Mr Hyland was elected as Ireland’s representative to the Council of Europe Independent Group of Experts for Trafficking.  He was instrumental in the establishment of and remains chief advisor to the Santa Marta Group, a high-level partnership between law enforcement agencies, faith groups and civil society endorsed by Pope Francis at its launch in the Vatican.

He leads several international anti trafficking projects, chairing the Responsible Recruitment Group of the Institute of Human Rights and Business and the Island of Ireland Human Trafficking Project, and provides strategic leadership to the OSCE in producing global victim support guidance. He is the author of SDG 8.7, and led the efforts for its inclusion for the eradication of human trafficking within the UN 15-year global goals.  He continues to drive international and domestic efforts in the fight against human trafficking advising Governments, businesses and multilateral organisations of necessary measures.