It is undoubtedly a highly emotional experience for me to be here. This is a meeting rich in knowledge  and spirituality.

Peace and tolerance are universal values: they transcend cultures and religions, they are the starting point for facing the political, social and humanitarian crises in the years we are experiencing. Today’s event, which I am very happy takes place within the framework of the Italian Presidency of the G20, is part of the noble tradition of interreligious dialogue.

I am thinking of the declaration Nostra Aetate of the Second Vatican Council and of the World Day of Prayer for Peace in Assisi in 1986.

In recent years, messages of brotherhood and solidarity have come from all the religions of the world and from every continent.

Muslim religious leaders in 2007, addressing Christian leaders, identified “love of neighbor” as the foundation for mutual “peace and understanding.” 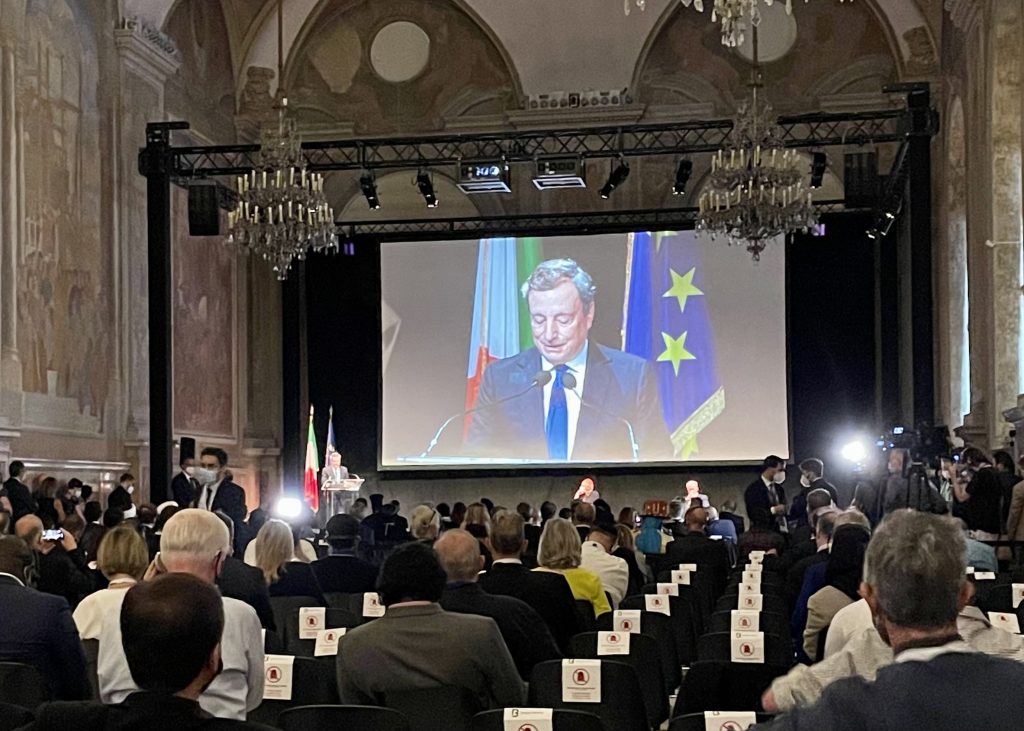 These reflections must not only be the object of dialogue between theologians, but must also influence the behavior of men and women. Celebrating diversity and dialogue between cultures and religions is essential for civil coexistence.

We often understand it only when it is too late: when clashes and violence are no longer avoidable. This is true today, as in the centuries that preceded us. In its past, Europe was torn apart by religious conflicts. Political leaders often ordered such massacres, or turned away, under the illusion that this was enough to escape their responsibilities. But at certain moments in history, not acting, not taking part, is immoral.

Religion must never be exploited. In the worst cases, it has been used to justify violence, deprivation of fundamental rights, or direct popular favor towards very earthly political ends. We must oppose the terror, even the subtle oppression that wants to deprive us of our values ​​in the name of religion. For me, religion is love and its principles are defended firmly but also with charity, not with irreconcilable aversion, or, worse, with war and terror. As Pope Francis said: “hostility, extremism and violence do not arise from a religious soul: they are betrayals of religion.”

Equally fundamental is to protect freedom of religion, opinion and expression: The right to freely profess one’s faith and to worship it, in private or in public. To be able to convert to a religion or abandon it, without being persecuted. To build one’s own identity, based on respect and not on hatred.

Today, however, we are witnessing a worrying number of episodes of religious extremism and conflicts between different faith families. We have seen this in the terrible attacks claimed by terrorist organizations such as ISIS; in terrorist acts committed in the name of white or Christian supremacism; and in the manifestations of anti-Semitism, a phenomenon in worrying growth. In some cases, in particularly hateful actions, in places of worship, spaces in which comfort, hope, protection from hatred are sought.

These brutal events are often used to represent a world divided between opposing communities. But it is useful to remember that victims of terrorism often share the same faith as their killers. Fanaticism affects everyone, indiscriminately. The international community, and the G20 that Italy presides over this year, must have respect for freedoms and the maintenance of peace as primary objectives.

The crisis in Afghanistan has brought back these priorities with terrible urgency. In recent days, we have been witnessing images that take us back to the darkest years in that country’s history. In particular, women, who in the past twenty years had regained basic rights, such as education, today risk even being banned from practicing sports, also repressing their representation in the government. As an international community, we have a moral obligation to a country we have been in for twenty years; an obligation to provide humanitarian aid, to prevent terrorism, to support the protection of human rights. The other duty we have as the West, and in particular as Europe, is the protection of those who decide to leave Afghanistan. Italy has helped some 5,000 Afghan citizens escape the enormous risks they were exposed to. It has been a significant effort, which we must be proud of, but which cannot be exhausted now.

The European Union must not ignore the tragedy of these people, nor the historical significance of these events. For years, the Union has not been able to build a common approach on the issue of migration, and in particular on the distribution of those arriving and seeking asylum. We must demonstrate that we are up to this crisis and the values ​​we claim to represent. It is also on reception, and not only for the economy, that the maturity of the European integration process is measured. After the pandemic and the resulting economic crisis, today we have a unique opportunity to rebuild.

We know, well enough, the things that went wrong, and I am referring in particular to social, economic and environmental imbalances. And we know what the objective of our political action must be. The Italian presidency of the G20 has placed the pandemic, climate change and global recovery at the center of its agenda. We want to overcome the differences in the supply of Covid-19 vaccines; Reach an ambitious agreement for the reduction of emissions; And strengthen the economic safety nets for the poorest countries. The G20 brings together the most important economies on the planet. Achieving these goals is our specific moral responsibility.

To defeat the pandemic, the vaccination campaign must go everywhere. Only in this way will we be able to save lives, curb contagion, avoid the emergence of dangerous variants. To date, however, only 2% of the population of the poorest countries has received at least one dose of the vaccine – compared to 42% for the rest of the world population. At the Global Health Summit in Rome, pharmaceutical companies pledged to provide 1.3 billion doses at controlled prices to low- and middle-income states by the end of this year. Another 2 billion will be distributed by 2022. The European Union will donate at least 100 million doses this year. The increase in vaccine production in recent months has been such as to ensure adequate supplies to cover a significant portion of the population of developing countries. It is now necessary that the doses reach those who need them. In other words, there is a logistical problem of equal importance to that of the availability of vaccine production.

The G20 as a whole is responsible for around four-fifths of global emissions. However, the effects of climate change are particularly damaging to the poorest states. Nine of the ten states most affected by extreme weather events between 1999 and 2018 are not advanced economies. These countries have benefited less than others from our development model, but they are the main victims of it. In the meeting on environment, climate and energy in Naples, the G20 reaffirmed its commitment to contain global warming by 1.5 degrees and to achieve net zero emissions by 2050. We also intend to raise funding of at least $ 100 billion a year to help developing countries in their ecological transition. Pope Francis, the Ecumenical Patriarch Bartholomew and the Archbishop of Canterbury recently appealed to the international community to “choose life,” to protect future generations as well. At the November conference in Glasgow, we must respond positively to this invitation and take courageous decisions involving all states.

After the trauma of the pandemic, the world economy is growing again. However, the recovery doesn’t involve everyone equally. According to the most recent forecasts, most of the G20 countries will recover the ground lost during the health crisis by 2022. This will not happen for two thirds of the most fragile states. The consequences for the poorest run the risk of being dramatic. According to the FAO, there are over 150 million more malnourished people due to the pandemic. The G20 has proposed a package of measures to support developing economies, involving the International Monetary Fund and the World Bank. We have reached an agreement to facilitate debt restructuring for highly indebted countries. There is still a lot of work to be done to increase resources, to involve private creditors who
do not participate in this agreement, which so far has benefited a small number of countries. We need to watch over the commitments already made and be ready to take more courageous ones. The duty of politics is action, preceded and guided by study and reflection.

In this, you religious authorities have a fundamental role. Awaken the sensitivities that slumber in indifference or by calculations of convenience. Call policy to action consistent with your message. In the most tragic moments of recent history you have built bridges where terrorism and war or, as mentioned before, indifference had erected barriers. You have called for respect for differences and the repudiation of discrimination. And you have courageously defended the rights of communities that are victims of persecution.

The proposals that you have presented in this forum, and which the G20 intends to examine, reaffirm the depth of your commitment. And they reaffirm the importance of knowledge and listening, without which there cannot be an authentic culture of diversity, for the full recognition of the values that are the basis of our humanity.