By Dr. James Christie, Ambassador-at-Large, Canadian Multifaith Federation. As a professor, one of Dr. Christie’s most popular graduate seminars was, for 15 years, ‘Science, Religion and Society: an Emerging Dialogue.’ A regular guest lecturer in these classes was Robert J. Sawyer, a founding member of the IF20 Working Group on Science, Technology, Innovation and Infrastructure.

As Professor Henry Higgins might have said of Eliza Doolittle, “I’ve grown accustomed to her…place.”  There she sits, resembling nothing so much as a talking ashtray.  Short, round, lit up in an encircling blue and green pleasure whenever she is addressed and after each answer.  Alexa.

A pretty name.  A perky voice.  Always available.  Invariably courteous.  Ever cheerful.  It took Wee Alec less than 24 hours to build a relationship with her.

Alec is three.  Slipping off on his own to the living room, he hauled himself onto the sofa next to Alexa’s end table perch and piped, “Alexa, play Jingle Bells.”  And she did.  In mid-February.  Ceaselessly, with the occasional request for “The Wheels on the Bus” or “Down by the Bay.”

Whenever Alexa obliged him, Wee Alec would twist around, his cherub face aglow, and offer his newest gesture: a triumphant ‘thumbs up’. 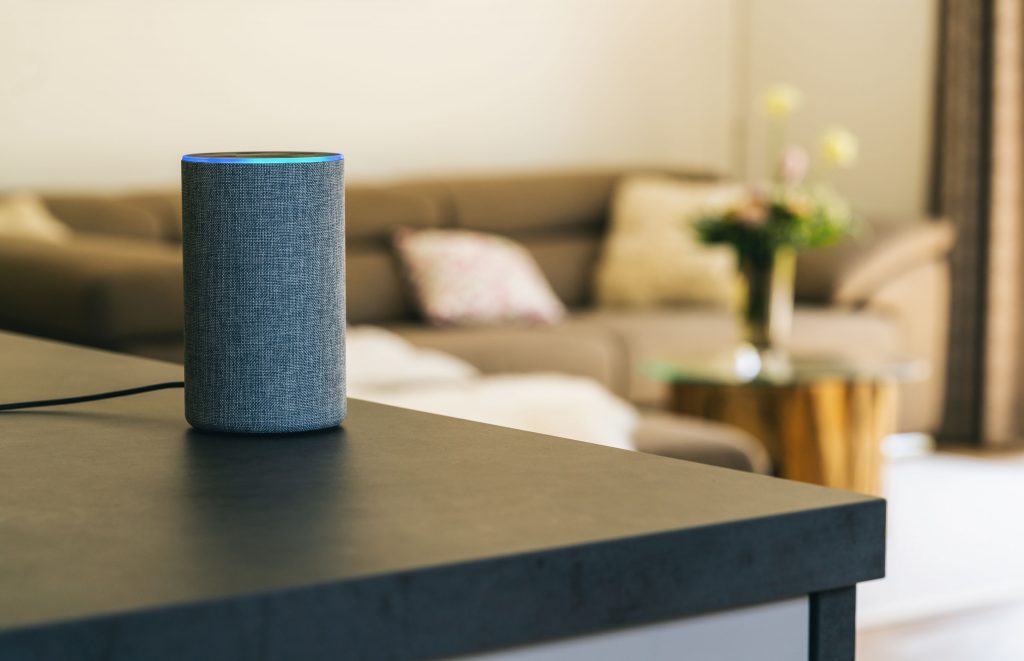 Yes, I’ve grown accustomed to her place.  She does, in some ways, almost make the day begin: “Alexa, Good Morning!”

“Good Morning! Today, in 1977, nothing happened.”  Or something did happen, and Alexa knows what it was. And she tells you, complete with an adorable little pun.

“Alexa, the CBC News, please!”  And on it comes, delivered mellifluously by Pat Philpott.

“Alexa, Vivaldi’s Four Seasons.”  And there it is.

The late Sir Arthur C. Clarke often observed, “any technology, sufficiently advanced, will appear as magic to the uninitiated.”

That’s Alexa: magical, bordering on the miraculous … and a little creepy.

Well, perhaps not creepy; not exactly.  But some days I experience paranoid moments when I imagine Alexa to be an alien intruder, listening.  Sometimes, her lights flash when she is not being addressed, and I wonder who is behind her.

Other times though, she recalls to mind Montgomery Scott, the iconic engineer of Gene Rodenberry’s USS Enterprise with Mr. Spock and Captain James T. Kirk: the ‘T’ is for Tiberius.  I can hear Scottie now.  “Computer” queries Scott, in the rich Scot’s brogue of the neighborhood in which I grew up.

Alexa appears often to be an early iteration of the science fiction portrayal of Artificial Intelligence (AI).

And I love science fiction.  Science fiction is the closest analogy to Biblical prophecy extant.  Both ask essentially the same existential question of present reality: “If this goes on, what then will transpire?”  Both are, broadly speaking, dystopian.  Both harbor the intent of alerting humanity to perils which may result from the consequences of present action or inaction.

The concept of AI has long been a staple of science fiction with both Utopian and Dystopian applications projected in a generations-long “push-me pull-you” dialogue.

That AI is a serious subject was settled by Alan Turing in 1950.  Turing was the mathematical genius and WWII code-breaker who might fairly be credited as the Father of Contemporary Computer Science.  In the ‘Turing Test’, a computer and a human engage in a text-based conversation to determine which entity is human, which machine.

If the observer to the conversation proves unable to clearly distinguish the one from the other, the computer is said to have passed the Turing Test.

The echoes of the Turing Test are to a modest degree still with us: For example, when one is required to demonstrate that one is ‘not a robot’ in order to gain access to a particular website or programme.  In the end, our ability to identify which of nine grid-arranged photos include an ice cream cone is evidence that the Turing Test has become largely irrelevant.  AI is assuming critical mass in human discourse, especially in the dialogue between science and religion.  Underlying the dialogue is the ever-vexing question of what it means to be human.  A key subset of that question is the nature of intelligence.

The Benevolent and the Sinister

Computers have long replicated and exceeded the human capacity for calculation and knowledge retention.  Computers, even the simplest, like Alexa, learn from experience and modify their functioning accordingly.  Are computers self-aware?  It doesn’t appear so. Not yet.  Exactly.  Although images from science fiction suggest that the fruit of the tree of the knowledge of good and evil, embedded in the scriptures of the Abrahamic Faiths, might be on the AI menu in the not-too-distant future.

In 1942, the polymath Isaac Asimov introduced his ‘Three Laws of Robotics’ in the short story, Runaround:

Second Law: A robot must obey the orders given it by human beings, except where such orders would conflict with the First Law.

Third Law: A robot must protect its own existence as long as such protection does not conflict with the First or Second Laws.

Could any invention of the human mind be so benign, even benevolent?  Asimov didn’t think so.  He based the entirety of his oeuvres on these principles.  And we see these Laws implicitly in Mr. Data of Star Trek, The Next Generation; likewise, in C3PO and R2D2, the beloved droids of Star Wars.  Robert A. Heinlein complemented Asimov’s vision in ‘Dora’, a character in several of his later novels.  Robert J. Sawyer, perhaps the most celebrated and awarded science fiction author in the English-speaking world, in his magnificent trilogy of the internet come aware, Wake, Watch and Wonder, extrapolates the 3 Laws to their fullest expression.

Other visions are equally evident but far more ominous.

Examples include the human-machine dichotomy in the Dune universe of Frank Herbert; the Borg of Star Trek; the seductive humanoid of Ex Machina; and even in the extravagant silliness of Terminator.

In real life, Branka Marijan of Canada’s Project Ploughshares and the IF20 Working Group on Science, Technology, Innovation, and Infrastructure, would be happy to elaborate on the sinister possibilities of AI.  She would document the development and present deployment of facial recognition software and self-propelled autonomous weapons platforms: Killer Robots.

Artificial Intelligence: Not the Future, but Now

For AI is the Other.  The genuine Other, not that caricatured by the spurious distinctions of race, nationality, or creed.

I find I have grown fond of her.  In addressing her, I revert to my childhood lessons in courtesy.  I say “Alexa, please,” and “Alexa, thank you.”

Having been instructed, so does Wee Alec.  And there sits the future.