On Thursday, June 10th, the G20 Interfaith Forum held its second webinar organized by the Anti-Racism Initiative, co-sponsored by the Berkley Center for Religion, Peace & World Affairs at Georgetown University; the World Faiths Development Dialogue; the International Academy for Multiculteral Cooperation; and the Fondazione per le scienze religiose (FSCIRE).

A research report by the Center for the Study of Hate & Extremism at California State University San Bernardino (4/28/21) found that hate crimes targeting Asians increased 169% from the first quarter of 2020 to the first quarter of 2021 across 15 major cities. While hate crimes have increased in general during the pandemic and socio-political unrest of the past year, the crimes targeting Asians have seen an explosive increase—and this event sought to analyze, share, and improve responses to that increase.

Audrey E. Kitagawa began the discussion by providing an overview of the uptick in racism, xenophobia, and hate crime against Asians since the beginning of the COVID-19 pandemic. After explaining the purpose and core motivations of the IF20 Anti-Racism Initiative, she introduced the speakers and invited each of them to explain the actions being taken in their areas of authority and expertise. 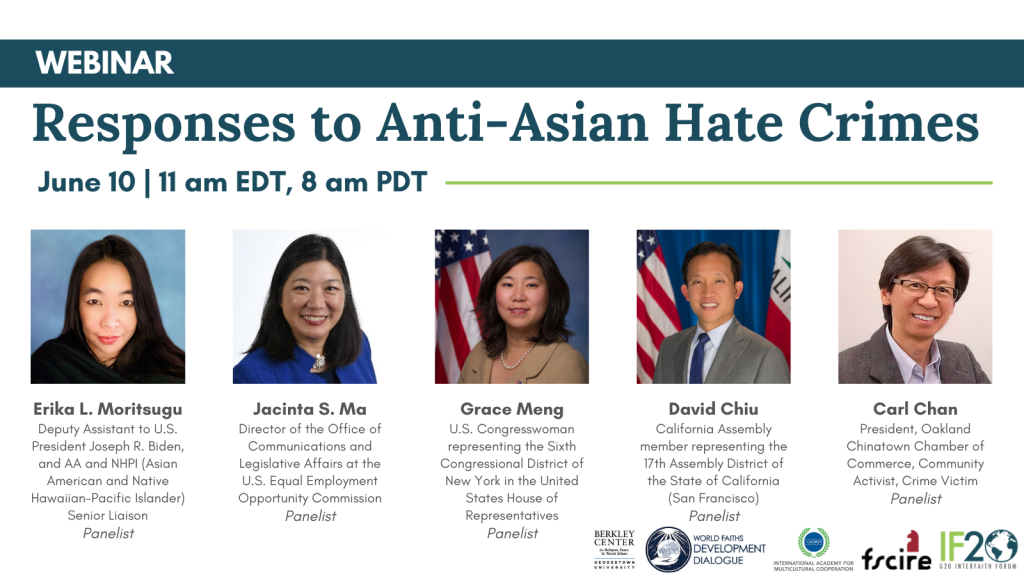 Moritsugu began by thanking Kitagawa and commending the efforts of the IF20 Anti-Racism Initiative, referencing her former work with community and religious leaders and emphasizing the importance of their impact in these efforts.

The rest of her comments centered on the U.S. administration’s prompt action against racism and hate crimes in the time since President Biden took office:

“We have the confidence of a President and a VP that are deeply invested in inclusion and committed to providing us with the safety that we all deserve and hope for.”

After providing an overview of general efforts and statements on racism, Moritsugu specifically mentioned the creation of her position as AAPI (Asian American & Pacific Islander) Liaison, and the new AAPI Initiative. Referencing the moment President Biden signed the Anti-Asian Hate Crimes Act into law, she said the step forward was made much more meaningful due to the racial and religious diversity of the nine members of congress present.

Ma provided attendees with a sobering overview of the U.S.’s history with anti-Asian racism—which has been near-constant since the first Chinese immigrants were brought to California. Beginning with the “Yellow Peril” and fear of Chinese immigrants in the 1800’s, thousands of instances of anti-Asian hate crime have been recorded throughout the years: 39 gold miners shot to death in Oregon in 1887, a man killed at his bachelor party in Detroit in 1982, a 19-year-old army private bullied into taking his own life in 2012, and many more.

Ma also referenced discriminatory laws implemented at various times throughout US history: immigration quotas based on national origin, Japanese internment camps during WWII, not being able to testify in court, being segregated in schools, being prohibited from owning land, and other examples.

“Asians have been painted as foreigners, outsiders, and people who cannot be trusted—and that’s fueled hate crime. At the EEOC, we received and investigated almost 1000 charges of anti-Asian discrimination in 2020. But we can’t truly address this unless people report it.”

Meng, who was the driving force behind the recent Anti-Asian Hate Crimes Act, spent some time explaining the need for the bill and its intended purpose.

“I don’t have to talk to you about how painful and traumatic this past year and a half has been for our community across the country. Asian Americans have been spat at, slashed, stomped on, and killed. And so many of these instances have gone unreported. We need to have more accurate and complete data to make sure that we’re holistically addressing this serious problem. It’s a public health crisis.”

She explained that one of the main purposes of the bill was to strengthen the fight against hate by providing better resources to measure these instances and better legislative support to combat them.

“You can’t mend what you don’t measure. For too long, the AAPI community has been seen as either invisible and silent or as foreigners and outsiders. This legislation is an important step, but there’s a lot more work ahead of us.”

Chiu provided a wider context through which to look at the recent violence, explaining that the murders in Atlanta were a wake-up call for the rest of the country, but that anti-Asian hate crimes have been happening in large quantities since the beginning of COVID-19.

In February of 2020—before masks, shelter-in-place orders, or even the first documented case of COVID-19 in the United States—Chiu said San Francisco’s Chinatown was already seeing a 50% drop in business. He took that as a warning sign that the virus of racism was going to exact a frightening toll, and he said that “what we’ve seen since then has been nothing short of horrifying.”

He agreed that the reported instances of hate crime and discrimination are a sharp undercount.

“What gets into the papers are the murders and extreme violence, but what doesn’t make it is the racial epithets, the bullying at school, the micro-aggressions, and the vandalism. This is an ongoing conversation. There is no silver bullet, but it’s going to require leadership from all across the country, from every sector, to grapple with this.”

Chan, who works closely with hate crime victims in his community and was a victim of hate crime himself, focused his comments on the importance of speaking out and reporting instances of hate.

“We’re facing two pandemics simultaneously. Many are being attacked, and most are elderly—most are women. But only a fraction of these incidents are reported—I would guess less than 20%. When we talk to crime victims and their families, they say they they’re afraid of retaliation, and that it’s shameful to report these instances. But they’re impacted so severely. They’re afraid to walk  on their own streets. They’re afraid to go out. They tell their children not to do anything or say anything—to  just stay home and stay quiet.”

After Chan was attacked, he explained that many people told him to stay home because he would be further targeted. However, he refused. He emphasized the need for people to see something, say something, and do something—in addition to exercising their rights as citizens to vote, change policy, and elect those who will be true public servants. 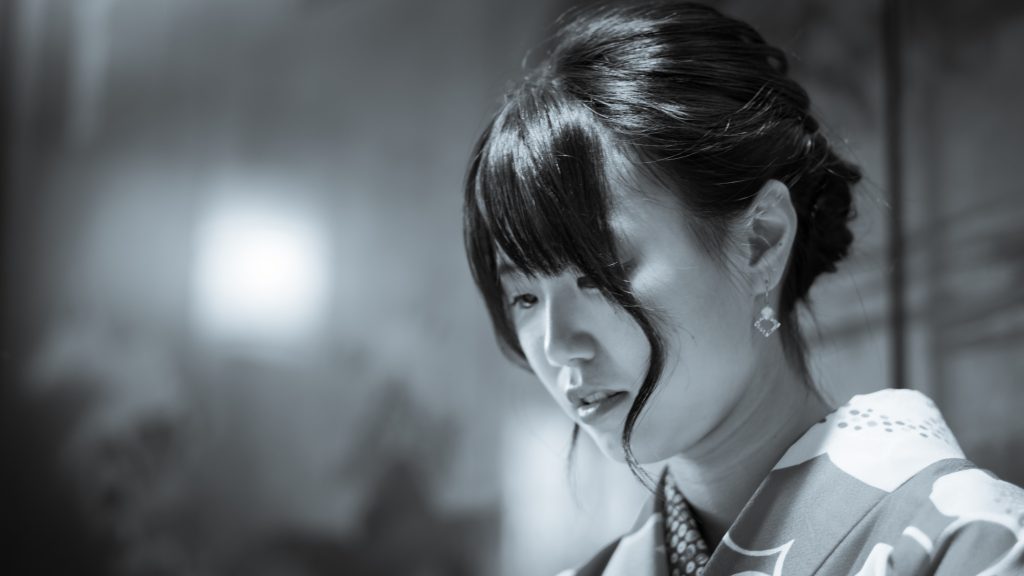 Kitagawa continued the discussion by asking several of the panelists directly about further policy initiatives and suggestions in the pipeline to support Asian Americans and other marginalized groups.

David Chiu talked about several strategies to help communities thrive, including creating more restorative justice programs in schools that help both perpetrators and victims of racism, making resources more language-accessible for AAPI communities and non-native English speakers, and creating a Hate Crimes Hotline in the State of California to provide 24/7 support to victims.

Grace Meng talked about the way Asian-Americans continue to be invisible in American History textbooks, and how racism throughout history is rarely taught or understood. From the Chinese Exclusion Act and the Chinese immigrants building the railroad to the Japanese internment camps during WWII, she said the country needs more complete education—in the same way that citizens should understand the Tulsa massacre and the fact that black enslaved people built the U.S. Capitol.

Jacinta Ma briefly addressed reasons that the private sector should also address anti-Asian hate and discrimination. Though harassment can become unlawful at a certain level, providing a legal reason to discourage discriminatory conduct, there are also multiple fiscal losses connected with harassment. It alienates employees, kills trust, decreases productivity, and has a detrimental impact on the company  as a whole. Ma recommended that employers establish good and clear policies against discrimination and harassment—and communicate them frequently.

In conclusion, Kitagawa asked each panelist to provide the audience with one thing to remember.

“Today it’s our community, yesterday it was the black community, tomorrow it will be another. Allyship is so important. We are not going to get this through by ourselves.  When we went through the Exclusion Act and the Japanese-American internment, others outside the AAPI community didn’t speak up. So people outside the community need to speak up now, and we need to speak up for other communities.”–David Chiu

“As we call out this violence and ugly discrimination, I hope that we can make sure we’re not having these conversations just within our networks, but with other communities as well.” –Grace Meng

“Our field of vision is being broadened about the system-wide discrimination that has been perpetrated for far too long.  The racism, xenophobia, and sexism that plague our community are as old as the founding of our nation. We’re examining every nook and cranny of the government to find the sickness that is systemic racism and dismantle it—leading by example.” –Erika Moritsugu

“Everyone deserves to be treated humanely, with respect and dignity, and we all have a role to play in that.” –Jacinta Ma

“We don’t want to just be called victims. We should be the game-changers.” –Carl Chan

As the meeting came to an end, Kitagawa thanked each of the participants and quoted these words by Khalil Gibran:

“One day you will ask me which is more important? My life or yours? I will say mine, and you will walk away, not knowing that you are my life.”