On Thursday, July 29th, the G20 Interfaith Forum held a third webinar organized by the Anti-Racism Initiative, co-sponsored by the Berkley Center for Religion, Peace & World Affairs at Georgetown University; the World Faiths Development Dialogue; the International Academy for Multiculteral Cooperation; and the Fondazione per le scienze religiose (FSCIRE). 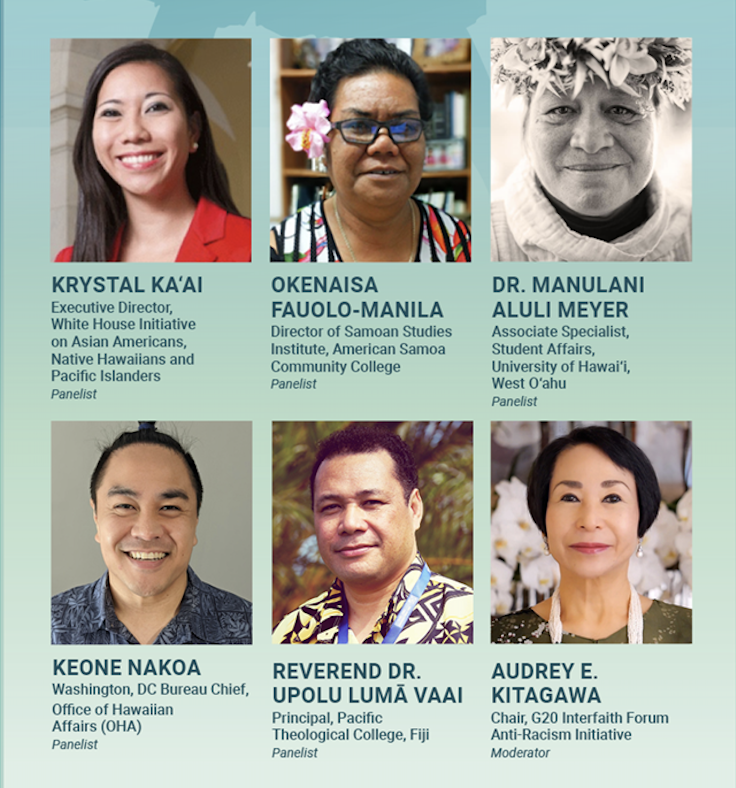 Kitagawa began the discussion by welcoming both the speakers and the audience, outlining the purpose of the IF20 Anti-Racism Initiative, and acknowledging the need for the discussion at hand. She asked each panelist to share how systemic racial challenges, including those with links to climate change, are affecting Native Hawaiian and Pacific Islander (NHPI) communities.

Ka’ai thanked the G20 Interfaith Forum for its admirable efforts to examine systemic racism and barriers in our society, then provided an overview of White House led recent actions to address racism against and advance equity for NHPII communities—including condemning racism, signing Executive Order 14031 to advance equity and opportunity for NHPI people, and reinstating/reinvigorating the Initiative on Asian Americans, Native Hawaiians, and Pacific Islanders.

“The past year and a half has been unlike any other, and the NHPI community has been devastated by this crisis. Their diversity has long been masked and aggregated with the data of the Asian American population, which prevents them from getting the attention they need. One of the mandates of this initiative is to address this data aggregation issue.”

Vaai focused his comments on how racism and colonial mindsets continue to affect NHPI populations today, particularly in regard to climate change. He referenced the more subtle Pacific Slavery system of “blackbirding,” and drew attention to the “ecological sins” of deep sea mining, extractive economies, and the loss and damage of nuclear testing, which he maintained are all inextricably connected to principles of racism. He then emphasized how essential spirituality is to science, especially climate science, in order to move it beyond dry data to something with heart.

“For colonialism to work, it must create a narrative where the black and brown ‘uncivilized’ people need to be saved. That narrative continues in the talk around climate change and the Pacific Islands. We need to promote a climate narrative that these island people have a sustainable culture, and we need to make plans that utilize indigenous strategies. Just because these strategies have not been tested in the west does not mean they don’t work.”

Nakoa provided an overview of Hawai’i and its complicated history with colonization and assimilation. He said that the Kingdom of Hawai’i, prior to the arrival of non-native Hawaiians, had a completely self-sustaining society, with a sophisticated language, culture, and religion, and a population more advanced and educated than almost any other society at the time. However, due to its strategic location between the US and Asia, Western assimilation was quick in coming. The Republic of Hawai’i was formed, and eventually ceded all its lands to be annexed to the US, without the consent of the native people or any compensation. The Native Hawaiian language was banned, and policies were adapted to assimilate people into American society.

After going from a population of nearly 1M to 20K at its lowest point, Native Hawaiians experienced a renaissance of culture and values in the 1970s, which led to the establishment of the Office of Hawaiian Affairs to protect Native Hawaiian rights and address disparities.

Fauolo-Manila referenced her experiences teaching and advocating for Samoan culture in American Samoa, pushing for her students and her community to know their history. She said there is ample lip service to preserving the island’s culture and language, but when it comes to the reality of actually trying to implement action and policy, support is very slippery.

“Knowing the story of Samoa is understanding that you are a survivor. Our culture has been around for 3,000 years, and I’m going to make it survive for another 3,000. According to the UN, we’re a colony—but we don’t see ourselves that way. We’re free. We have a partnership with the US, and we would love to keep it that way. We’re Americans, but we’re also Samoans—and we have to know our stories in order to keep that balance.”

Meyer focused her comments on how indigenous epistemology and spirituality can enable NHPI societies to rise to a “higher frequency” and heal the damage of the past and present.

“If I could summarize indigenous epistemology in one sentence, it’s ‘love land, serve people—serve land, love people.’ Equity, reciprocity, and transparency are a great foundation to build on. Once we start to tell the truth, the truth will heal. All of these systems will begin to deconstruct and reconstruct. Eventually these things become the ‘higher frequency’ of equanimity, simultaneity, and truth. The consciousness that solves a problem cannot be the consciousness that developed it, so we must take on this higher frequency.” 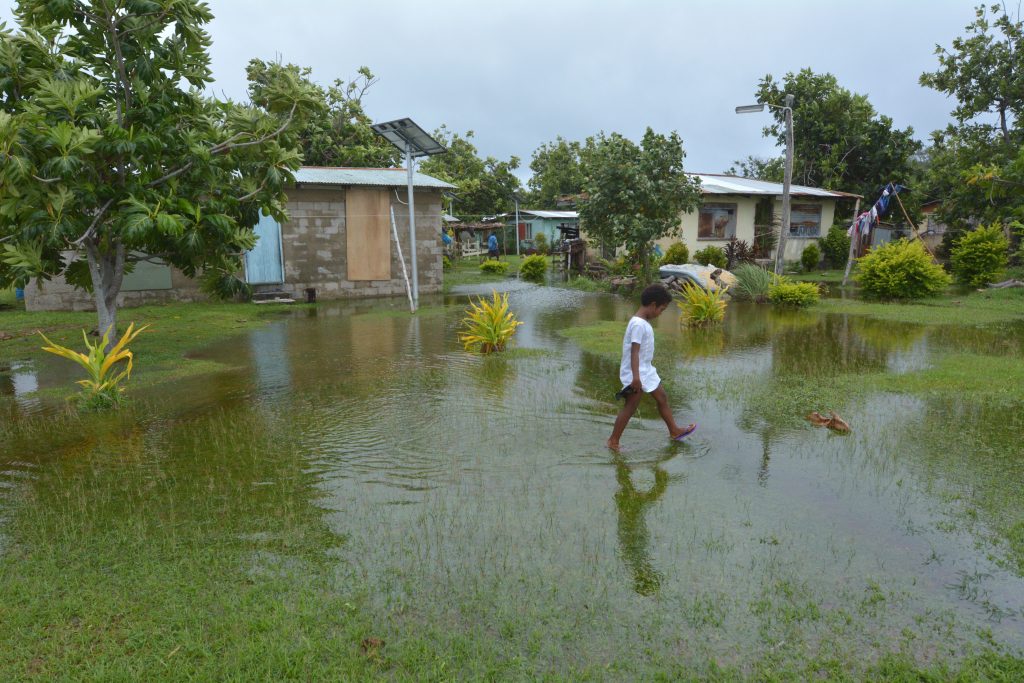 The Q&A session included questions from both Kitagawa and the audience, and covered topics including:

In conclusion, each speaker was asked to offer a few final remarks to the audience.

“I’m so inspired by the discussion that was had today, and it gives me a lot of hope for the future. There are so many barriers to be overcome, but collectively our communities are strong, and we’ve proven our ability to overcome and resist.”

“Hope is hearing the melody of the future, relationality is dancing to it. Our histories and civilizations didn’t begin at our first contact with western explorers and missionaries. We can only truly be ourselves if we accept who we are.”

Nakoa restated that racism, most times, is merely ignorance, and suggested two things that can be done to move the ball forward:

“Relationality is not the opposite of racism. It’s the genesis of how all things heal. And we’ve seen a lot of that today.”

“Your words, passion, vision and inspiration have resonated deep within us, and we are grateful to have our awareness raised by your powerful sharing. It’s uplifting and hopeful to know that these communities have advocates and leaders such as yourselves.”