Mobilizing the massive global COVID-19 vaccination campaign is an all-hands job. For many reasons, including their highly trusted and ubiquitous presence, religious leaders and institutions have potentially large roles in advocating for equitable vaccine rollout, helping to reach the poorest communities, and supporting efforts to overcome the troubling hesitancy that slows vaccination progress. A new Religion and Vaccine Survey, conducted by the Public Religion Research Institute (PRRI) and the Interfaith Youth Core (IYC), offers some reassuring news, with data demonstrating that U.S. religious actors have helped to boost vaccination levels in recent months. 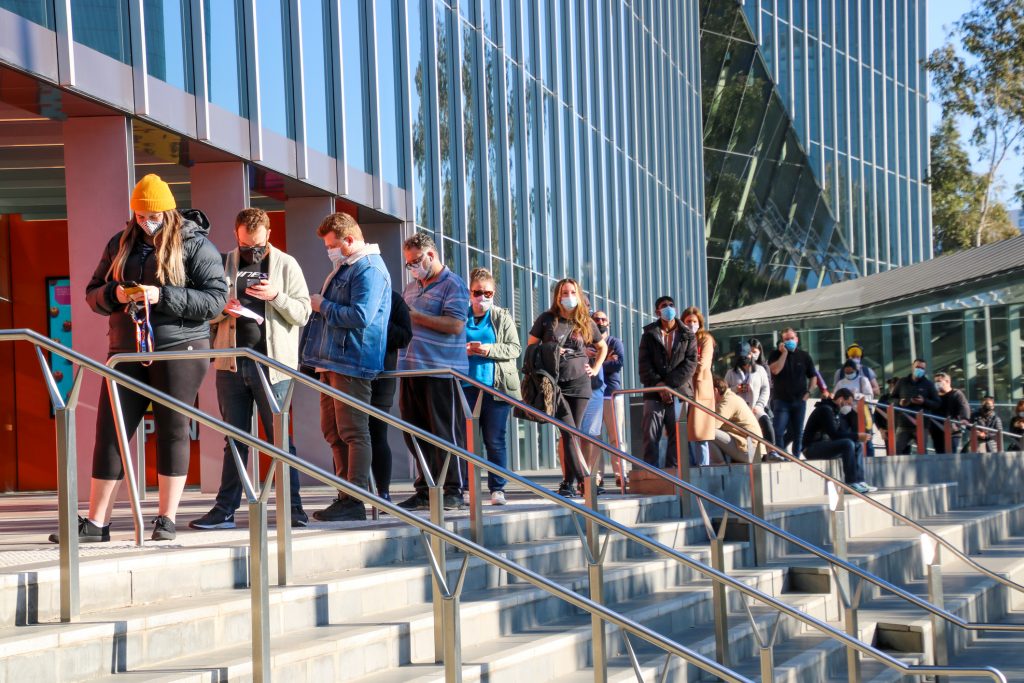 A Decline in Religious Vaccine Hesitancy

The June 2021 survey was an update of a similar collaborative survey conducted in March 2021, and it focused on attitudes toward COVID-19 vaccination among specific religious communities in the United States. There were significant shifts between the two surveys. The June study concludes that the percentage of Americans who say they are vaccine-hesitant—meaning they will either wait to get vaccinated or will only get vaccinated if they have to—has declined among all of the religious subgroups surveyed. It suggests that religious appeals have played an important part in countering vaccine hesitancy.

The Impact of Faith-Linked Approaches

Respondents cited religious leader action as influential in shifting the tide of vaccine hesitancy. Among religious respondents who were vaccinated and attend religious services at least a few times a year, more than one-third reported that faith-linked approaches had an impact on their decision.

40% of Hispanic Protestants and 30% of Black Protestants who became vaccine acceptors and who attend religious services said that one or more faith-linked approaches—for example, forums on vaccine use convened by a local religious community or a faith leader’s encouragement—helped convince them to get vaccinated. And more than one in four vaccinated white evangelical Protestants reported that faith-linked approaches encouraged them to accept vaccination.

The results are encouraging given significant recent efforts by diverse groups and deliberate political support for religious engagement on vaccination campaigns: the Faiths4Vaccines coalition is a prominent example. The detailed and timely survey data also suggest some potential ways to enhance the impact of these efforts but above all highlight the urgency of action in the fast-evolving pandemic.

One challenge is that even positive religious outreach seems to see a declining impact over time, with vaccine-hesitant members of most of the religious subgroups surveyed reporting that they are less likely to turn to faith leaders for information today than they were in March. The survey results also point to the need to direct efforts specifically to those who are vaccine-hesitant, while new approaches are needed  for those who outright refuse vaccination. There is also room to encourage religious leaders to take on the challenge, as some lament that they are wasting their breath in trying to convince their congregations to get vaccinated. And there is more to do to learn which approaches—a vaccine clinic or pop-up event versus a sermon, for example—work best.

The PRRI-IYC survey results align with global patterns that are seen in the Religious Responses to COVID-19 project, a collaboration between the Berkley Center for Religion, Peace, and World Affairs at Georgetown University, the World Faiths Development Dialogue, and the Joint Learning Initiative on Faith and Local Communities. These patterns differ by context, but a common factor is trust—an important part of continued dialogue between faith communities and health experts to combat vaccine hesitancy and resistance.