Urges religious leaders to “act decisively to ensure that religion is no longer ‘part of the problem,’ and instead becomes ‘part of the solution’”

BOLOGNA, Italy, September 12 – 14, 2021: Indonesia’s Minister of Religious Affairs, H. Yaqut Cholil Qoumas, has delivered a landmark address setting the agenda of the world’s largest Muslim majority nation and democracy for its chairmanship of the G20 Interfaith Forum (IF20), to be held in 2022.

The video address — delivered to political and religious leaders gathered from around the globe at the historic Salone del Podestà in Bologna’s 13th-century Palazzo Re Enzo — outlined Indonesia’s strategy to mobilize the world’s great faith traditions to preserve and strengthen the post-WWII rules-based international order at a time of increasingly unimpeded violations of international law and rising human rights abuse.

“It is essential to reflect upon the fragility of our current world order and abstain from placing further stress upon its intricate and highly complex social, economic and political infrastructure,” observed Minister Qoumas. He went on to state:

“Religion has a vital role to play in this regard, for it has the potential to help block the political weaponization of identity; curtail the spread of communal hatred; promote solidarity and respect among the diverse people, cultures and nations of the world; and foster the emergence of a truly just and harmonious world order, founded upon respect for the equal rights and dignity of every human being.” 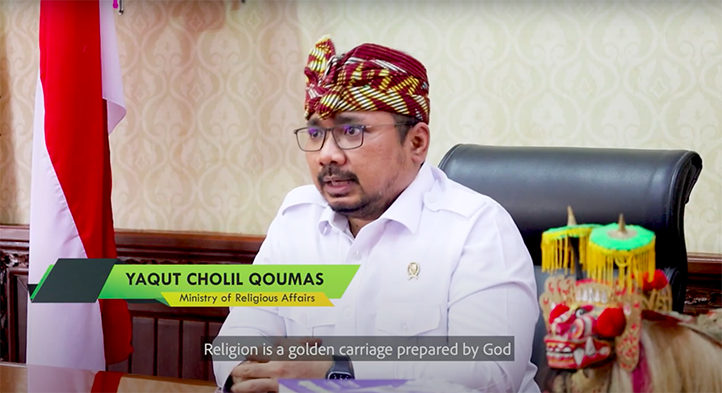 Minister Qoumas’s speech was delivered at the closing ceremony of the IF20 — chaired by former President of the European Commission, Romano Prodi — and was preceded by addresses from the Chief Rabbi of Rome, Riccardo Di Segni; confidant of Egyptian President Abdul Fatah al-Sisi and Representative of the Grand Imam of Al-Azhar, Mohamed Abdel-Salam; Cardinal Archbishop of Bologna, Matteo Maria Zuppi; and Italian Prime Minister Mario Draghi, among others.

In addition to his speech at the closing ceremony on September 14, Minister Qoumas delivered a shorter address to the G20 Interfaith Forum’s 3rd ministerial session, titled “Religious Affairs and Peaceful Coexistence.” The session was chaired by Italy’s Minister of Interior Luciana Lamorgese and co-chaired by Christos Stylianides, Special Envoy of the European Commission for the Promotion of Freedom of Religion or Belief outside the EU.

This ministerial session was held in the library of the University of Bologna. Founded in 1088, it is the oldest university in continuous operation in the world. Notable alumni include the English martyr Thomas Becket (d.1170); poet Dante Alighieri (d.1321); Petrarch, the founder of Renaissance humanism (d.1374); German artist Albrecht Dürer (d.1528); the Christian humanist Erasmus of Rotterdam (d.1536); Polish astronomer Nicolaus Copernicus (d.1543); and Guglielmo Marconi, inventor of the radio (d.1937).

The IF20 gathering in Bologna was designed to create a number of policy recommendations to be delivered to world leaders of the G20 prior to their gathering in Rome on October 30 – 31, 2021.

In his address to the IF20 ministerial, the Honorable Mr. Qoumas stated that the Pope’s words “express a vision that lies at the heart of Indonesian society and our way of life. I believe they also express a vision and a set of fundamental values essential to the emergence of a peaceful and harmonious global civilization in the 21st century.” 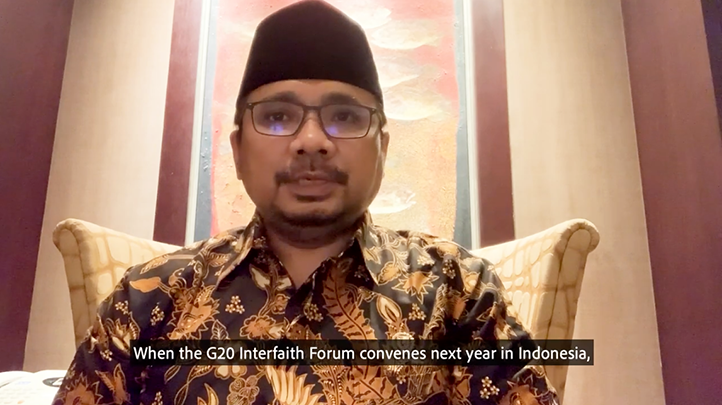 “Being natives of the Dutch East Indies and having experienced, their entire lives, the systematic discrimination, indignities and injustice perpetrated by Dutch colonialism, our founding fathers sought to establish a system of government founded upon the principle of respect for the equal rights and dignity of every human being…

“By enshrining these principles at the heart of the world’s largest Muslim-majority nation, Indonesia’s founding fathers demonstrated their commitment to preserving the great Islamic civilization established by our ancestors, which is rooted in the principles of rahmah (universal love and compassion), justice and other noble values of religion.

“When the G20 Interfaith Forum convenes next year in Indonesia, this vision, and these principles, will lie at the heart of its agenda and serve as our contribution to the shaping of global civilization in the 21st century.”

Minister Qoumas’s interventions swiftly went viral in Indonesia, attracting widespread coverage in print, broadcast and social media. International attention included coverage by Qantara.de, a widely read internet portal in German, English and Arabic produced by Deutsche Welle in order to promote intercultural dialogue between the Western and Islamic worlds. The portal was founded on the initiative of the German Foreign Office, in reaction to the September 11 attacks in the U.S.

In an article titled “Indonesia G20 presidency to focus on ‘the soul of Islam,’” Middle East analyst James Dorsey contrasted the starkly different approaches to projecting religious soft power employed by Minister Qoumas and Turkey’s Ministry of Religious Affairs, known as the Diyanet. In a section headlined “Nahdlatul Ulama, a role model for Sunni Islam?,” Qantara inserted an image of the NU banner with a caption that read:

As widely reported in Indonesian media, the Minister of Religious Affairs concluded his speech by quoting a poem by Nahdlatul Ulama spiritual leader KH. A. Mustofa Bisri, titled “Religion”:

is a golden carriage

to convey you along the path

to His Divine Presence.

Don’t become mesmerized by its beauty,

much less enchanted to the point

that you come to blows with your own brothers and sisters

over who occupies the front seat.

He has been waiting for you

View Indonesia’s Minister of Religious Affairs’ address to the closing ceremony of the G20 Interfaith Forum in Bologna, Italy:

Timothy Samuel Shah, Ph.D. is a political scientist specializing in religious freedom, religion and global politics, and the history of political thought. He was recently appointed as a Distinguished Research Scholar in Politics at the University of Dallas, and he also serves as Director of Strategic Initiatives at the Center for Shared Civilizational Values.