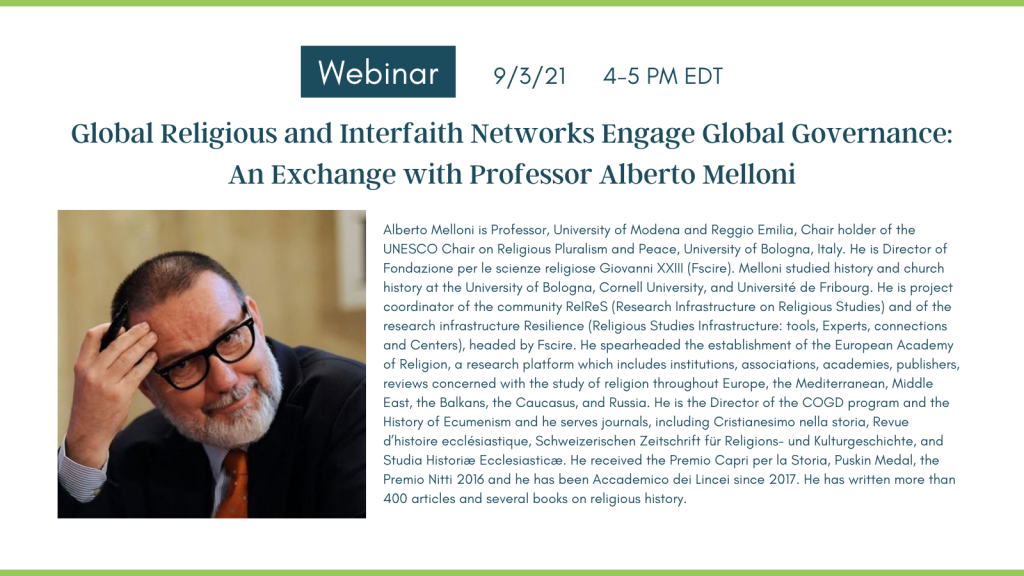 Katherine Marshall introduced the discussion by providing context surrounding the Berkley Center’s history and her work shared with Alberto Melloni’s to prepare the G20 Interfaith Forum—the religious engagement group for the G20 Summit—which will kick off in Bologna, Italy on September 12.

The webinar was also serving as the first event in the Berkley Center’s 2021-2022 program focusing on roles of religion in global governance. Marshall challenged audience members to expand their view of the topics at hand beyond the G20 Interfaith Forum to every situation that brings religion and governance together—starting with three markers in recent years that have “catapulted us into new ways of thinking about religion”:

Marshall framed the rest of the dialogue as a question-and-answer conversation and began by asking Melloni to outline how he sees the religious dimensions of global governance from his position as a historian and a scholar.

Looking at history and then looking forward, how do you see these religious dimensions of global governance?

Melloni said when it comes to religion, interfaith action, and the role of faith in governance, many of the ideas we’re using are still the ideas of 30 or 40 years ago.

“Interreligious dialogue since the 90’s has been re-traveling the ‘first mile’ over and over. True, it’s important, but it’s easy. We all agree together that there should be no legitimization of violence, then we end with kisses and candles in front of the camera.”

He also said that one of the prophecies regarding religion that came out of the 60’s—that the imaginary utopia where everything goes well is a world without religion—was wrong. Religion is not disappearing. It is, however, being affected by ‘religious climate change,’ which is increasing the temperature of religious experience—sometimes to the point of violence.

Two schools of thought have sprung up around addressing the newfound (and often dangerous) heat of this ‘religious climate change’:

How does the ambitious project of the IF20 come in, working toward these ‘second and third miles’ of interreligious and government engagement?

This isn’t just about religious leaders advancing their agendas. It’s about truly working together with political leaders. Either government or religion by itself can only simulate and pretend to engage in a dialogue while asking for something. Government typically sees religion as useful because it can be called on for low-cost services, especially in the humanitarian sphere—why fight religion when you can buy their help for a few pennies? And on the religious side, leaders want to become more visible and to use the government to do that. Especially when things are going wrong in government, they have more to talk about.

“We hope that through this model of dialogue at the G20 Interfaith Forum, we have the chance to learn how to differ and how to have a dissent. It’s very evident that we cannot reach an agreement on what religious freedom is, for example, and we need to learn how to talk about that.”

There are new engagement groups emerging around the G20 and others that are less formal:  the Vision20, the Vulnerable20. In relation to the G20 and their responsibility to bring these vulnerable voices to the table, what is the IF20’s role?

“What I hope from the IF20 is to overcome, to an extent, the way that these large organizations often overlook the vulnerable. The G20 represents 80% of the world’s GDP—and this is exactly the problem, not the solution. You can fit the income of more than half of humanity into a bus, and it’s still the few and the rich who are making these high-level decisions. We need to study the underlying reasons behind these crises. We need to restore the distance between the powerful ones and the vulnerable ones.”

Melloni also emphasized the wording of ‘principles’ over ‘values,’ saying that everyone can find in their own tradition or belief a reason to respect the life of the ‘other,’ to aid them in their suffering, and to forgive—which is necessary in order to create real stability. 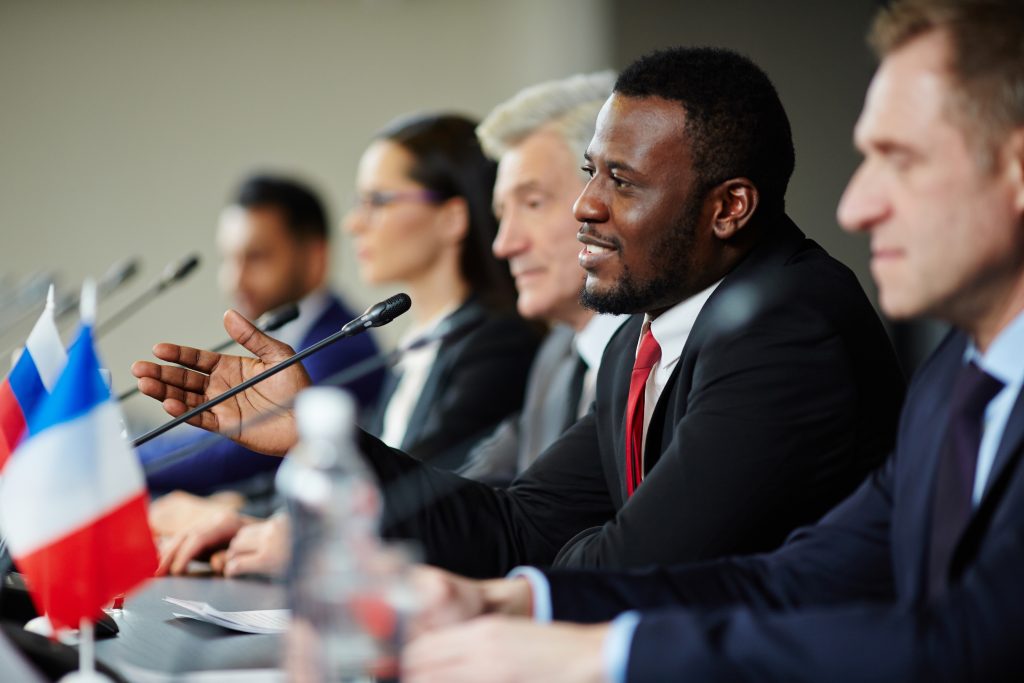 The Italian G20 Summit’s three pillars are people, planet, and prosperity. As the IF20, we are focused on a theme of healing, and we’ve added a fourth pillar: peace. What roles does religion have in this huge consensus global agenda?

“’A time to heal’ in Ecclesiastes is the opposite of ‘a time to kill’—so in addition to the pandemic of COVID-19, we must heal from the pandemic of war. In the Jewish daily prayer and the Latin litany, there’s a verse asking God to deliver us from pestilence, famine, and war—because these three usually go together and seldom happen in solitude.  If this IF20 summit is to be one of leaders and not of followers, we need to be dedicated to finding ways to heal all three: hunger, disease, and war.”

How do we translate these principles of human rights into practice? In terms of religious radicalism and ‘fundamentalism,’ how can we go beyond the candles and the kisses while still retaining the depths of our own convictions?

“Religious illiteracy and ignorance are covering tragedies—especially in the belief that the worst believer is the most sincere one. These people are sincere, but they don’t understand their own religions. Violent extremism is too clean a wording to refer to some of these people—and it isn’t these people, but their interpretations of the faith that must be analyzed and destroyed as soon as possible.

“The question isn’t how profound your persuasion is that your religion is true. It’s the result that comes from that persuasion—whether you’re producing compassion or producing violence. With religious belief, you can essentially make a spoon or you can make a sword.”

What are the paths forward in dealing with the religious literacy problem?

Melloni said that through his research on religious literacy in Italy and in Europe as a whole, he has learned that the idea that religious literacy is easy is even more dangerous than religious illiteracy. Simply teaching children the symbol of a cross, for example, does very little. In religion and in thought, all of these small facts and elements are like letters. Letters of the alphabet by themselves have little power, but together they can become words, then a phrase, then a poem.

He said we need to focus more on achieving the “realistic utopia” that is found only through the patience of creating deep research, thorough knowledge, and real expertise about how all of these elements work together.

Using the term ‘moderate’ as the opposite of ‘extremist’ seems unsatisfactory. We need people with deep convictions who can still see the different sides of the issue. Do you have any comments on this language?

“’Moderate’ is a virtue of government alone. People are not asked to be moderate—they’re asked to be wise. The word ‘moderate’ first came into popular use in the United States around the time of prohibition, talking about alcohol use. Moderation is for things that are dangerous, that can threaten your health. As people of faith, we’re looking for wisdom, compassion, and love. Those words define much better what we’re looking for. I’m pessimistic enough to think that we’ll never be delivered by the language of ‘radical’ and ‘moderate’—and we need to be careful about giving some of this language to human beings.”

Several questions from listeners were addressed in the course of the dialogue. Among topics highlighted were the role of the G20 vis-à-vis the United Nations (to which Melloni responded that the platforms are both and, not either or) and approaches to religious extremism.

In conclusion, Marshall thanked Melloni for his ideas, comments, and wisdom, and the audience for the interesting questions that they raised. She said the Berkley Center will continue the discussion and reflection over coming months, and she hoped the discussion would continue next week in Bologna as well.