On Thursday, January 20th, the G20 Interfaith Forum held its first webinar of 2022, organized by the Anti-Racism Initiative and co-sponsored by the International Academy for Multicultural Cooperation. Panelists included Milton Allimadi, Assistant Professor of Journalism at Columbia University and Publisher of blackstarnews.com; Keisha Bush, Writer and Artist, and Author of “No Heaven for Good Boys”; Ben Dotsei Malor, Chief Editor of UN News at the UN Headquarters in New York; and Nisrin Elamin, Assistant Professor of International Studies at Bryn Mawr College. Dr. Ganoune Diop, Director of Public Affairs and Religious Liberty for the Seventh-day Adventist Church, moderated the discussion. 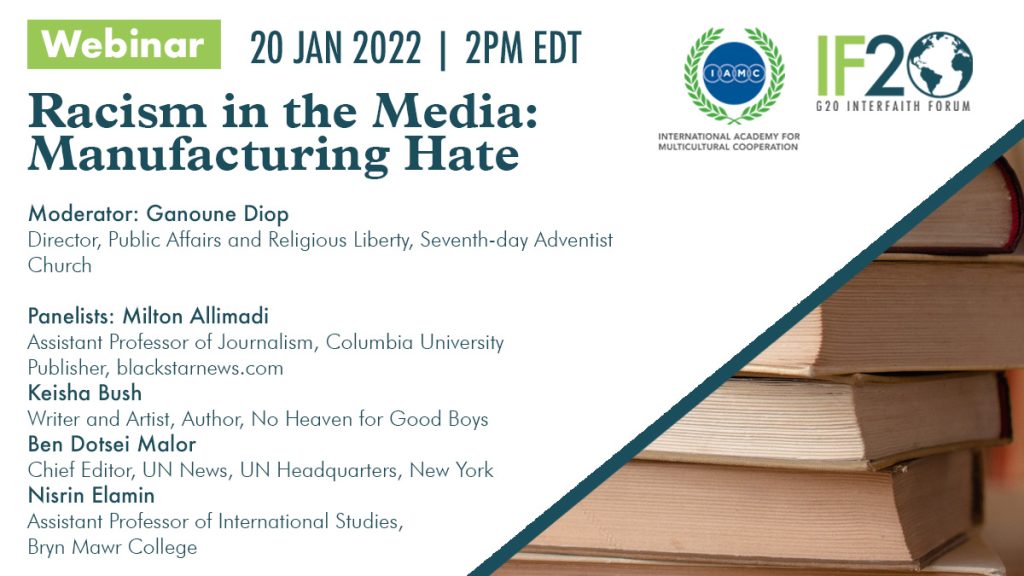 Diop began the discussion by stating that one of the greatest challenges of our time is revisiting what it means to be human and humane. He said the media has indulged in or deliberately promoted the myth of racial hierarchy, superiority, or inferiority—playing a critical part in perpetuating the multifaceted phenomenon of racism through biased communication.

He highlighted the fact that “racism is not just a personal feeling—a pride and arrogance of internalized dominance based on a sentiment of superiority. It is a disease in interpersonal relations. Its most damaging effect, though, is its pervasive nature as a matrix of dominations—woven into an ecosystem of oppressions, bringing suffering and death to millions of peoples the world over, especially Blacks, indigenous people, and people of color.”

“Why are we focusing on the media today? Because racism couldn’t be woven into the whole ecosystem of dominant worldviews without the cooperation of the media. The media has not been neutral. However, the media can also become an instrument to help in the areas of healing, reconciliation, and restoration, restoring the truth of one humanity.”

Each speaker was asked to briefly share their thoughts before the floor was opened for a Q&A.

Bush focused her comments on her experience as an author with the book publishing industry. Her novel, No Heaven for Good Boys, focuses on the human rights crisis in Senegal—and the heroes in the book are Senegalese. She said that when she decided to write the book, she was very cognizant of the fact that books about Asia, Africa, or other areas outside the “traditional Anglo-Saxon sphere” are very infrequently written by the actual people of those regions.

“These writers usually aren’t even able to write their own stories. They can’t get book deals, and when they do, they aren’t paid equitably.”

She said that the setting and topic of her book, combined with the fact that it broke the traditional pattern by not including a “White Savior,” made the process much longer and more difficult before the book finally got its chance. Then, at the last moment, the book’s release date was bumped and marketing was pulled in favor of a “White Savior” autobiography about Governor Cuomo rescuing New York from the pandemic.

She also detailed how Anglo-Saxon standards of beauty are used to determine whether or not an author is “marketable,” even though they’re writing instead of acting or dancing, effectively silencing even more potential authors and writers.

“The narratives we’ve been taught have always portrayed brown and black people as not having agency—or the ability to tell our own stories, live our own lives, and save ourselves. Publishers say ‘we give the people what they want,’ but if we’ve always been following the same pattern of exclusion, the data and feedback are only going to reflect what’s always been.”

Malor began by making some observations based on his 12 years with the BBC in London and his current experience at the UN News Center in New York.

“First, can we just acknowledge that racism in the media is real? It’s real, it has been real, and it’s had disastrous, damaging, and costly consequences.”

He quoted popular Nigerian novelist, Chimamanda Ngozi Adichie, from her acclaimed talk, ‘The Danger of a Single Story:’ “Show a people as one thing; As only one thing, over and over again, and that is what they become.” The damaging effects of telling a single story are strong, he added.

He said that in late November of 2021, diligent, professional, and experienced scientists in South Africa managed to identify a new variant of COVID-19—and in the spirit of transparency, they told the world. However, instead of South Africa being recognized and rewarded for this, countries throughout the world instituted immediate travel bans against South Africa and several other neighboring countries. At a time where 70% of Omicron cases were in the UK, the UK was putting a travel ban on African countries. In the same pattern, during the 2014 Ebola epidemic, when only three West African countries were affected, people/tourists from the Western world canceled trips to countries in East and Southern Africa—thousands of miles away with no Ebola.

As part of his recommendations to help solve the problem, Malor spoke to the need for conscientious balanced coverage of Africa, the establishment of a strong pan-African media house—and also for current media houses (in the West) to rely on more localized reporters and experts, as it’s impossible to accurately cover Nigeria through a correspondent in Johannesburg.

Allimadi focused his comments on how the media has been woven into the agenda of colonialism and used to justify hate, racism, and discrimination. He said that racism in the media cannot be isolated from the owners of media, and that media always defends and serves the interests and agendas of the ruling class.

In the era of slavery, media was critical in convincing the citizens of Europe and the New World that the people on plantations, the people being lynched, the people being beaten were not the same as them. It had to be justified, and the most effective way to justify it was demonizing them through the media.

Allimadi said that colonialism followed the same pattern, with media as the most effective weapon for colonialists to overcome African resistance through demonization and emasculation. He said the argument was effectively that ‘the reason we can steal their land, use their resources, and “ethnically cleanse” them is because they aren’t people—they’re backward. They’re savages.’ Eventually, he said a format was created for news and media correspondents who visited Africa to follow so that the same concocted image and manufactured hate could be perpetuated.

“How is it that Africa and Africans have been historically and even contemporarily portrayed as backwards and savage when it is the resources of Africa that have enabled the Western world to industrialize? Something is not adding up.”

Elamin centered her comments on how racist reporting shapes US interventions and foreign policy in Africa, with a main focus on Sudan. She said when mainstream US and European media started reporting on Sudan’s December Revolution, they framed it narrowly as “bread riots.”

“This narrow framing of a powerful resistance and revolution took its power and played into the narrative of a 30-year, brutal military regime, that protesters were simply reacting to the removal of food and fuel subsidies and that things would return to normal once they were reinstated.  Africans demanding democracy and justice through non-violent protests doesn’t fit the playbook, and even people who strive to be educated about these things don’t learn about them through the news. In addition, protestors being portrayed as violent rioters in the media has empowered the coup regime in Sudan and elsewhere to use the discourse of anti-terrorism to justify the use of violence against non-violent protestors.”

She said newsrooms and media-makers in the US rely heavily on the State Department and other government entities to make sense of African affairs, which has dangerously led to the manufacture of crises in Africa that are de-historicized. In addition, the way African women are portrayed by Western writers in their “singular experience of victimhood” invites a White Savior complex and is often instrumentalized to criminalize Africans and justify the expansion of US militarism on the continent.

During the question and answer portion of the webinar, key points included the following:

To conclude the webinar, each speaker offered one main takeaway for the audience.

“Start with self. Start questioning why you like what you like, why you read what you read. By challenging and questioning, we’re collectively able to push the needle forward toward a more human, empathetic world.”

“There is hope. We are no longer just victims. The powerhouses of the media that were there before don’t have to be obstacles anymore. We must use the Internet and Social Media to circumvent the established media entities. We can have our own platforms and become agents of change.”

“As the mother of a two-year-old, I’ve been thinking a lot about the images and books I expose her to. And we all should think about these things. What kinds of social media and images about Africa do you consume on a daily basis? How can you use social media in a positive way  and filter out the negative portrayals?”

A reading list in order to take agency and become better activists: