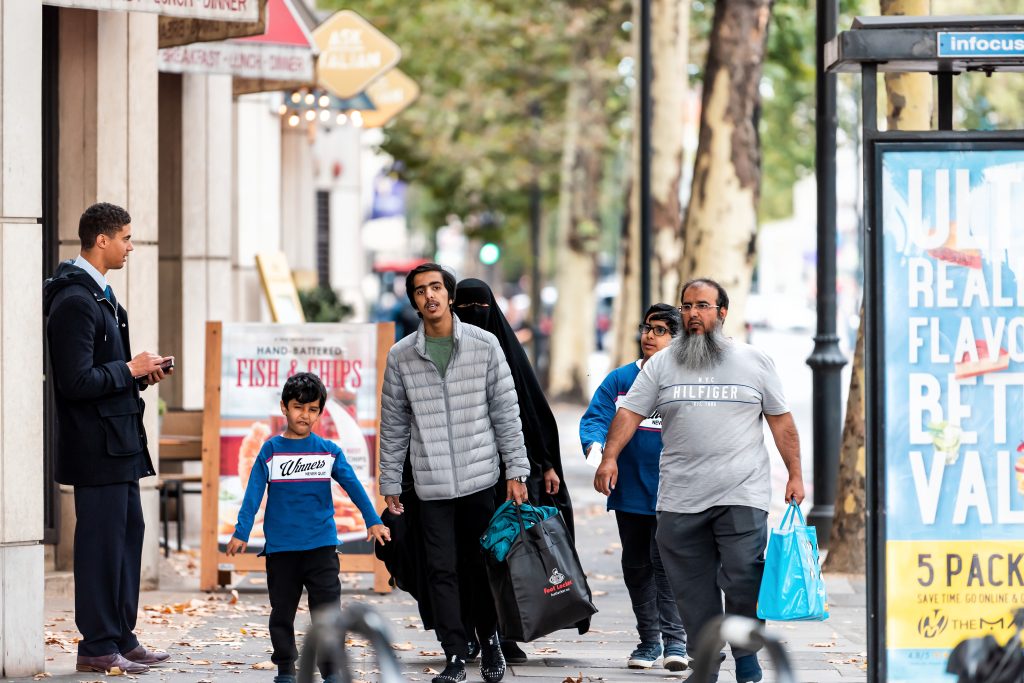 1972: One of my earliest memories is one of racial abuse – an old woman following me to the corner of our street. Wearing a thick beige overcoat, her legs smothered in thick brown stockings, her face distorted by thick-rimmed spectacles on her thick leathery face, she was a scary-looking creature who hissed at us over and over again, ‘Go home blackies – Go home blackies!’

Thankfully, and despite the occasional intrusion of the scary old hissing woman, my abiding memory of The Avenue remains our white neighbours – in particular the two girls, Beverley and Jacqueline, who would peer through the hedge of our back garden and giggle as I played there. It never occurred to me that they were ‘ethnic white people’ or that I was an ‘ethnic brown person’ – all we knew was that there was a frustrating green hedge that at once divided and united us.

A few years later, I was again ambushed on my way home from school by a gang of boys who were clearly being cajoled into attacking me by a girl shouting, ‘Beat the dirty Paki!’ It was the first time I had heard that word; It wouldn’t be the last. It was also the first time I took a thrashing simply for being a ‘Paki’, and a dirty one at that.

The following year – we are in 1977 – I was told not to play in the local park because of ‘skinheads’. When these purposely embaldened individuals came for us – a motley crew of White, Asian and Black – with bats and nunchucks, we ran.

The next year, I understood that I was hated, so when a boy from my school tried to prick me in the neck with sewing needles while chanting ‘pakipakipakipaki’, I saw a monster, and punched him so hard that it startled even me. Following which, I noted with glee how the boy’s eyes were lowered in fear every time he passed by. And I felt great.

There was something nostalgic about the morning sun on June 24th 2016, the day after the Brexit Referendum. In a few years I would hit my own half century of organic existence. There was an atmosphere of failure in the air, of a sort of anti-climax. UKIP leader Nigel Farage, holding court in Brussels, was in his element, boasting:

“When I .. said that I wanted to lead a campaign to get Britain to leave the European Union, you all laughed at me – well I have to say, you’re not laughing now …’

It had startling echoes of a speech given at the Lowen Brau Keller in Munich in 1942 by Hitler, who said:

“They always laughed at me for my prophecies. Many of those who laughed then are no longer laughing now.”

These thoughts are not about Farage, or Hitler. They are about me, and my own personal journey, in a landscape impacted by Brexit in the short and long term.

Immediately after the vote, there was a spike in racist incidents against perceived immigrants – mostly non-white people. Certain sections of the media and promises by politicians had guaranteed that there would be. For some ‘white’ communities who saw themselves as marginalised victims in an evolving and seemingly unstoppable social and cultural change, Brexit was the Second Coming. For me, it was a vision of the Four Horsemen.

So here I am: It’s Brexit, Year Zero. I’m driving to the once promised land of Milton Keynes, taking the scenic route through leafy Buckinghamshire.

It was probably nothing, but the white woman crossing the zebra thanked the white man who stopped for her to cross, as did I. She gave the White One a victorious thumb up, awesome in its exaggerated physicality. And then she turned to look at the Brown One directly. As she cleared the crossing, she hissed in a leathery tone, ‘That’s a zebra crossing!”.

“I know”, the Brown One replied, “It’s why I stopped for you madam.”

I think she meant to say, ‘What? Are you still here?!’

Sayyed Nadeem Kazmi is a humanitarian development consultant and lawyer who has advised on numerous initiatives, including the UN World Conference Against Racism and Dialogue of Civilizations process. Currently focusing on human rights advocacy in South Asia, he is a former adviser to HRH Prince Hassan of Jordan, and chief representative to the United Nation’s Economic and Social Council for a global NGO.