On Thursday, May 19th, the G20 Interfaith Forum held an IF20 Regional Conference in Baku, Azerbaijan under the theme “Multicultural Perspectives on the Forefront of Global Issues.” The Conference included an opening session and three panel discussions featuring religious, political, and thought leaders from around the world representing diverse viewpoints and backgrounds. This second panel, entitled “Tolerance and Multiculturalism: Regional and Religious Perspectives” was moderated by Edward Rowe, President of The Stirling Foundation. Panelists included Erich W. H. Kopischke, Member of the Quorum of the Seventy of The Church of Jesus Christ of Latter-day Saints; Melih Yevdayev, Head of the Religious Community of Mountain Jews in Azerbaijan; Marie Juul Petersen, Researcher at the Danish Institute of Human Rights; Audrey Kitagawa, Chair of the G20 Interfaith Forum Anti-Racism Initiative, Co-Chair of the IF20 Gender Equality Working Group, and Founder/President of the International Academy for Multicultural Cooperation; and Archimandrite Aleksiy Nikonorov, Secretary of the Baku and Azerbaijan Eparchy of the Russian Orthodox Church.

Edward Rowe began the discussion by expressing his appreciation to both the panelists and the conference’s hosts in Azerbaijan. He said that moderating the panel was particularly meaningful to him because he moved to Azerbaijan in 1999 as a young lawyer with his wife and two sons. Though they quickly discovered that they were the only members of their faith in the entire country of Azerbaijan, they were greeted with tolerance, respect, friendship, and love by the people there. He expressed his happiness to be in the country once again.

“Azerbaijan is a remarkable country. It represents the intersection of East and West, Christianity and Islam, Shiite and Sunni, and many other things. This diversity has brought both opportunities and challenges—so it feels fitting to discuss tolerance and multiculturalism in this location. I hope that here, we can be helped in learning how multiculturalism can build the basis of genuine pluralism in a world as diverse as ours.”

He then introduced each of the panelists and invited them to offer their remarks.

Kopischke focused his remarks on defending each other’s religious freedom. He said the panel’s theme reminded him of the early history of his church—The Church of Jesus Christ of Latter-day Saints. The Church was restored in 1830 in the USA—a country that has religious freedom anchored in its constitution. However, in the first decades of The Church’s history, members faced intolerance and persecution, driven from state to state. The church’s founder, Joseph Smith, who was later assassinated for his beliefs, said the following:

“We claim the privilege of worshiping Almighty God according to the dictates of our own conscience, and allow all men the same privilege, let them worship how, where, or what they may.”

Kopischke said this privilege should be afforded to all humanity, and we cannot claim this freedom for ourselves if we don’t protect and defend it for others. He emphasized that though religion has, at times, been instrumentalized for personal, political, or power-based purposes, true religion binds us to God and each other, inspiring us to be good. Diversity provides an opportunity to cooperate, learn from each other, foster understanding, and heal wounds—making the world a better place for generations to come.

Yevdayev focused his comments on love and its connections to religion. He said that from the onset of the event, the different perspectives of religions had been mentioned many times, but the shared ones hadn’t been spoken about.

“God has endowed us all with his spirit and his love. No matter how pure our hearts, we must commit to pure deeds. We must cherish the friendships we have between people, countries, and nations. Azerbaijan is small as a country, but our deeds are great—we’ve proven to the world that it’s possible to exist in diversity and harmony.”

He said that the Jewish community has believed in Azerbaijan and its willingness to protect them from violence for centuries. But to continue to preserve that space, we must continue to prioritize dialogue to help the generations to come. 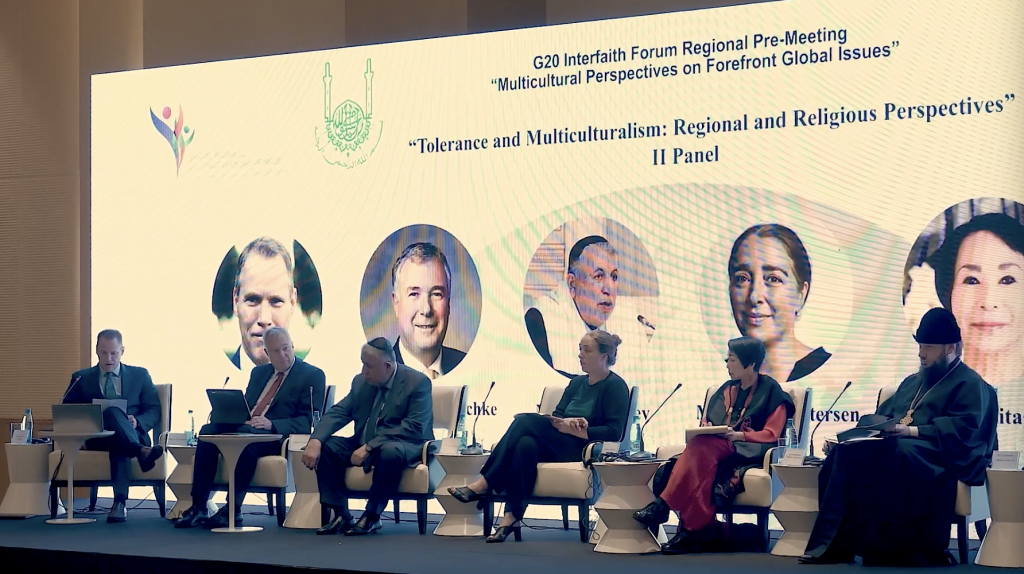 Petersen approached the topic from a Human Rights angle, looking at the interplay between Freedom of Religion or Belief (FoRB) and Interfaith Dialogue. She focused on two points:

First, Interfaith Dialogue can help FoRB. These types of dialogue can play an important role in bringing the abstract ideas of FoRB into practice. Often the language surrounding FoRB is very far-removed from people’s lived realities, and interfaith dialogue (which often focuses on themes like coexistence, tolerance, and unity rather than explicit FoRB dialogue) can bring down barriers, addressing FoRB challenges in people’s own languages and practices.

Kitagawa focused her comments on the role of women in efforts towards tolerance, multiculturalism, and peace. She said that technology is “shrinking” the world, enabling easy travel, the instant sharing of ideas, and more. With this globalization and growing interconnectedness, polarization is also growing.

She said that efforts to foster peaceful coexistence in a multicultural society should go hand in hand with the gender equality movement. Women have shown to be markedly more inclusive in advocacy and leadership positions, and that tolerance is the only value that can promote the survival of diverse communities. Instead of a passive word, however, tolerance must be an “act of liberation”—reaching out to others and standing up against discrimination and hatred.

Nikonorov focused his comments on the “national code” that Azerbaijan has created throughout the years which enables it to be an effective hub of multiculturalism and religious tolerance. He said language, culture, religion, and tradition make up a nation’s “code”—which determines how effectively diverse communities will be welcomed and integrated.

He said that for more than 30 years, the Azerbaijani culture of multiculturalism has shown good results, due to three important factors:

The discussion then moved into a Q&A segment, where Rowe asked each of the panelists to further expand on specific pieces of their presentations. The panelists then offered brief concluding remarks, and the session was closed.