On Monday, June 27th, the G20 Interfaith Forum held its sixth webinar of 2022, organized by its Anti-Racism Initiative and co-sponsored by the International Academy for Multicultural Cooperation. Panelists included Ellen Gabriel, citizen of the Kanien’kehá:ka Nation and Indigenous Rights advocate; Rick Hill, citizen of the Tuscarora Nation, artist, writer, and museum curator; Carmen Lansdowne, Member of the Heiltsuk First Nation and soon-to-be Leader of the United Church of Canada; and Gerry Oleman, citizen of the St’at’imc Nation and change agent for First Nation communities. Ja:no’s—Janine Bowen, member of the Beaver Clan of the Seneca Nation and Allegany Territory Language Director, moderated the discussion.

Ja:no’s Bowen opened the webinar by introducing herself and the IF20 Anti-Racism Initiative, welcoming all participants and audience members, and providing brief context surrounding the Pope’s upcoming visit to Canada.

“While Residential Schools have closed their doors, the effects of years of trauma and abuse linger in Indigenous communities. Unfortunately, members of the Catholic Church also participated in a plethora of human rights abuses, as nearly three-quarters of the schools were run by the Church.

“After listening to the testimonies of Canadian Indigenous delegates to Rome, Pope Francis issued an apology and scheduled a visit to Canada. An apology is one step forward, but there is more to be done here.”

Bowen said the topic was a difficult one, and invited all participants to come together and have a good mind as the uncomfortable issues were discussed. She then introduced each of the panelists and invited them to offer their remarks. 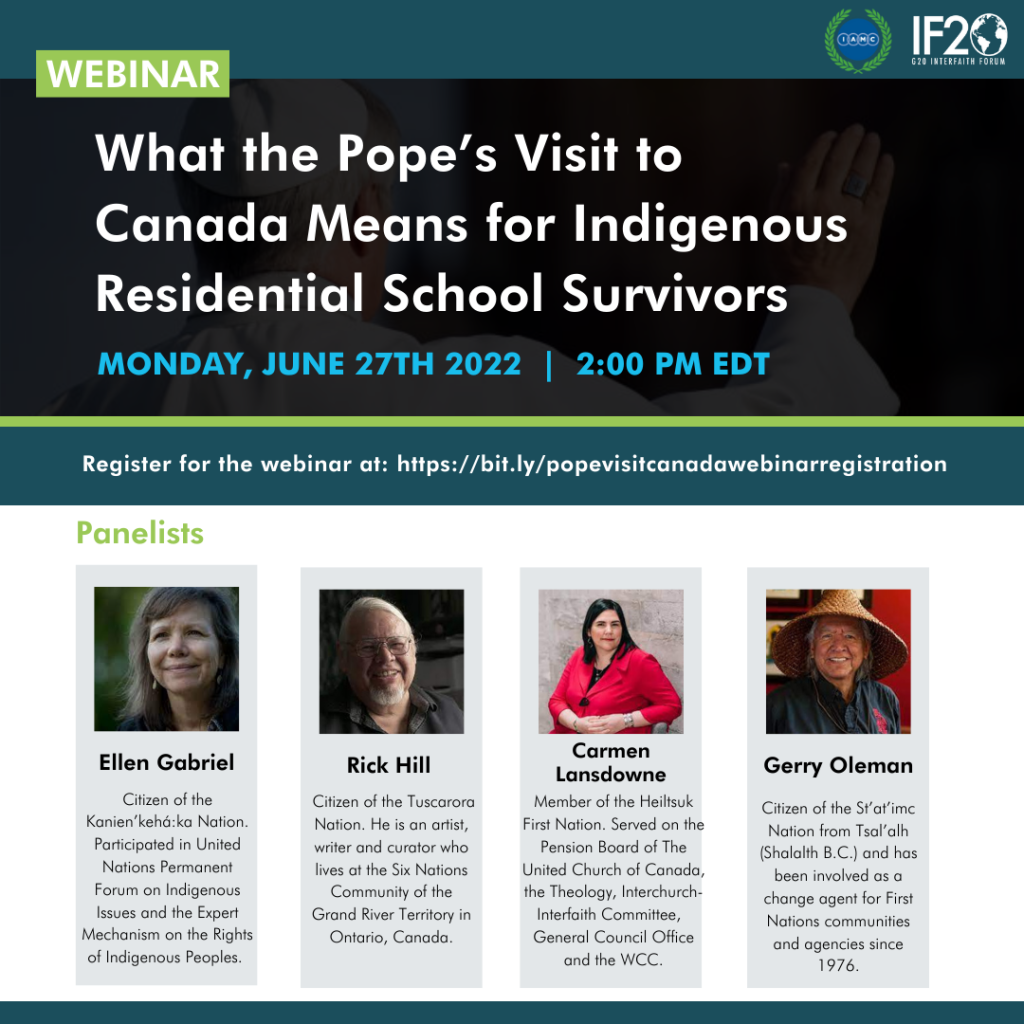 Gabriel began by offering several words in her traditional language, inviting the voices of the ancestors, the Earth, the sun, and the moon into the discussion. She then went into more detail on the Pope’s apology, putting it into context.

“When we talk about apologies, they’re just one step in the process of restitution and recovery. The 15th Century ‘Doctrine of Discovery’ is a genocidal project by the Catholic Church, essentially based on economics, that destroyed our people over the course of 150 years. It devalued the role of Indigenous women in traditional systems, ruptured the family unit, eliminated the essence and being of Indigenous people, criminalized Indigenous governments, and caused the erasure of Indigenous existence from school curriculums.”

Gabriel said that Pope Francis’s apology was essentially a personal apology, mourning the actions of a few members, but it did not take into account the role of the Catholic Church as a whole in the Residential School project or the systemic annihilation of Indigenous peoples and cultures in Canada. She said that Catholic Christians are currently listening more to their lawyers than their hearts when it comes to apologies, and that there needs to be true sincerity from all churches (actually following the tenets of their faith) if there is to be healing from the trauma caused by the Doctrine of Discovery.

Lansdowne went deeper into the Doctrine of Discovery, saying that it established the underlying political and religious concepts that perpetuate all the pain being experienced by Indigenous communities today.  She read an excerpt from one of the papal letters that established the doctrine, which included the following:

“…invade, capture, vanquish, and subdue all Saracens and pagans…to reduce their persons to perpetual slavery and to take away all their possessions and property.”

—1452 from Pope Nicholas V to King Alfonso V of Portugal.

Lansdowne concluded that if the edicts and permissions in the Doctrine of Discovery are the basis on which the relationship between the Catholic Church and Canadian Indigenous people has been built for the last 500 years, there is much to unpack.  She asserted that reparations to Indigenous Peoples should be taken more seriously, and all clergy should study the philosophies of Colonization and Decolonization in theological school. She also referenced the Church’s reluctance to take blame.

“The Roman Catholic Church are shapeshifters, organizationally. They put up shield walls, sometimes blaming a few members but protecting the core. And it keeps them from taking collective responsibility for the systemic structures of Residential Schools. I know that Pope Francis is walking a thin line where he can’t doctrinally admit the fallibility of past Popes, but the apology given in March is not enough.”

Hill began by saying he was initially reluctant to participate in the webinar at all because the more he studies and talks about the impacts of Residential Schools, the more depressing the issue becomes. He then focused his comments on the need for a more honest and earnest effort from the Catholic Church.

Hill said that the church was very reluctant to address the issue of Residential Schools when the story of the unmarked graves first broke. They blamed the Devil, then begged off their court-ordered reparations, saying that paying them would bankrupt the church. He also said the hierarchy of the Church knew the perpetrators of these Residential School crimes and abuses, and shifted them around to different locations to avoid prosecution.

“How can we believe another apology? Are we still going to protect perpetrators? Are we going to deny responsibility? It’s not just native people that were damaged. It’s parishioners. It’s the legacy of the Church. To heal from this, we have to build trust and create an ongoing friendship. But that can’t happen unless the church brings honesty and an earnest effort to move forward.”

Oleman centered his comments on the impact Residential Schools and the cultural genocide they exacted have had on Indigenous communities.

“They beat children for speaking the only language they knew. Some had their heads shaved, some had needles put in their tongues, just for speaking their language. I’ve heard ministers deny that they had anything to do with cultural genocide at Residential Schools, and that made me very angry because of what happened to me and my family.”

Oleman talked about the isolation and anger felt by Residential School survivors—without purpose, belonging, or identity, reacting negatively through addiction, violence, and depression. He said that trauma has become intergenerational, with many today who feel like they “aren’t Indigenous enough” since they know nothing about their own culture and language.

“We weren’t Christian, so another identity was created for us. We were lesser beings, speaking the devil’s language, using the devil’s tools in our ceremonies. It created tremendous chaos in our minds as children.”

In reference to the Catholic Church’s actions and attitudes today toward reparations and restitution, he said that ministers have a hard time trying to decide between being morally bankrupt and financially bankrupt.

“If being a Christian is to be like Christ, why aren’t they doing that? Loving their neighbor, helping people to heal, chasing the moneylenders out of the temple? They must judge themselves according to Christ’s principles.” 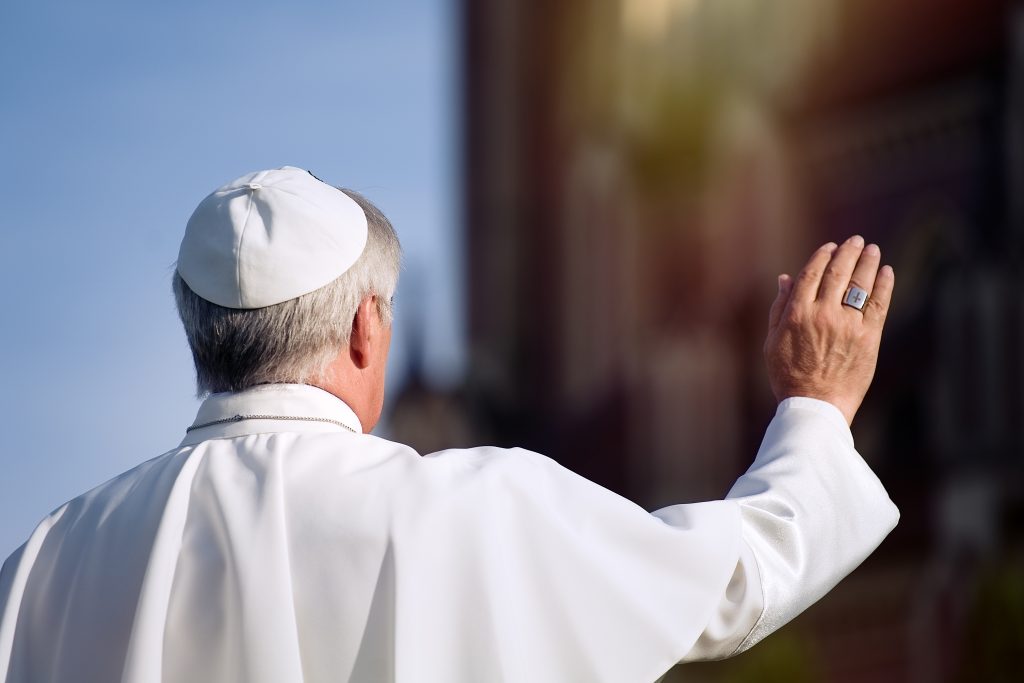 Bowen then invited questions from the audience, directing them toward one or more of the panelists.

What steps can the Catholic Church take within the next 5 years to demonstrate that they’re serious about their apology?

They need to make another, more genuine apology that takes accountability for their participation in the genocidal project. They should provide resourcces to combat and undo some of the trauma that’s been caused.  They should fill the gap and provide the resources that the Canadian government isn’t providing for the revitalization of Indigenous languages. They should repatriate the artifacts in the Vatican Museum and across the world that belong to Indigenous Peoples.

A more modest and actionable start would look like this:

Why can’t this issue be taken to the ICC?

The ICC is the International Criminal Court in Hague. They declined to investigate into the unmarked graves at Residential Schools, though the case was brought to them when that story broke. The mechanisms by which international criminal matters are handled make it such that it’s very difficult to prosecute historical matters.

What steps can we take if we’re never given the true apology and good faith measures we hope for?

We don’t need another white savior in a white robe on a white horse to save our souls and our communities. Our medicine people and ceremonial leaders and language speakers are already here. We need to decide that our future is determined by the power of our cultural and ancestral DNA.

Until the church makes a complete and accurate statement of accountability for the harm that they and their members have done, there will not be any significant movement. It’s the same for any human being. Change and healing only happen after we own up to the wrong.

As Indigenous people, we need to go back to our healers, go back to our national treasure community members who’ve refused to let the language and culture die. We need to start keeping our own laws again, and live so that seven generations from now, our descendants are going to have a life worth living.

In conclusion, Bowen invited each of the speakers to offer closing remarks, then she thanked everyone for participating and ended the meeting.